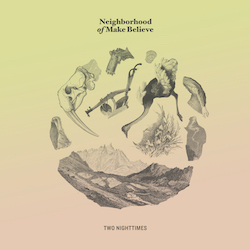 In this era of online overkill, it is refreshing to encounter a band that has seemingly no real internet presence. Certainly, a number of abortive Google searches have unearthed no biographical information about Neighbourhood of Make Believe. Their accomplished orchestral folk rock sound and well-produced tracks are suggestive of a decent degree of industry experience. However, if this is the case then they are doing their best to hush it up – all that can be said with any certainty is that they are a bearded five-piece from Albany, New York…

So, in something akin to a musical blind date, we encounter the music with no preconceptions. The album is entitled ‘Two Nighttimes.’ It is available on vinyl and digitally and is split into two parts – implying a conceptual approach. The lead singer has a vocal timbre similar to that of David Baker (Mercury Rev) which cuts through some of the soporific accompaniment to good effect.

Titles such as ‘Delusions of Grandeur,’  ‘Thin Soup’ and ‘Modern Psychography’ signal the fact that some of the subject matter the band sing of is out of the everyday industry confines. The lyrical approach (certainly on tracks like ‘It’s all Wrestling’) seems to centre on quite philosophical musings: “I’ve never read of a time when the truth was ever anything but the words of learned men / and curious as we have become, I haven’t found a question yet, to render wise men dumb.” This is absolutely not pop music – rather it’s an intelligent approach where the listener is required to delve through the ambiguity of the words to find meaning. On ‘Fairness,’ the question “does the punishment fit the crime?” is posed, while on the unsettling, discordant ‘Faces,’ lines such as “absorbed in the ironing” sharply focus on the everyday and the mundane, elevating them – in a fashion redolent of modernist poetry – into something worthy of melody.

At first, the use of horns and accordions creates a backdrop that seems reminiscent of Belle & Sebastian. However, without a sufficient range of tempos or styles it occasionally becomes somewhat predictable and the listener starts to feel like all the material has simply been washed with the same soundscape. Nonetheless, there is much to like about this release and it would no doubt find favour with fans fond of acts like Okkervil River, Hiss Golden Messenger and Beirut. While the mystery surrounding the band is endearing, it would be nice – especially with what amounts to a concept album – to know a little more about the band or at least the stories behind the songs.