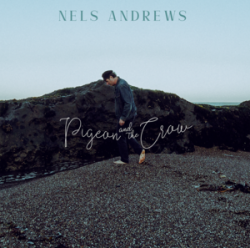 This is only the 4th studio album from Nels Andrews since he was selected as a winner in the New Folk Competition at the annual Kerrville Folk Festival in Texas in 2002, which isn’t exactly prolific by any measure. Perhaps it’s his way of keeping standards high. If so, it’s working, if the quality of ‘Pigeon and The Crow’ is anything to go by.

Produced by Nuala Kennedy, the album has a strong Irish folk feel, enhanced by influences throughout such as Van Morrison. It was recorded at Whispering Pines Studio in Los Angeles, a studio which was originally built for Sam Cooke in the 1960s. It was later turned into a funk/soul palace, abandoned when the owner found religion, and then later rehabilitated by Indie outfit Lord Huron. So, it has a little history. While recording, Andrews slept on the tracking room floor every night to try and absorb some of that history in this recording. And largely, it has worked.

The album opens strongly with ‘Scrimshaw’ which, oddly, is the name of Andrews’ 2012 album, although there doesn’t appear to be any obvious connection. ‘Memory Compass’ is a sitting-round-a-beach-fire kinda song (if someone has a large crashing gong or cymbals and a flute handy), the first of several of reflection… “my memory compass is always headed south/bay leaf and cinnamon in the back of my mouth”.

The standout title track is a fictionalised version of a true story of a young girl who ‘befriends’ a crow in her garden, who then brings her gifts. The tale is beautifully told as a love story, crashing gong featuring heavily again, along with mournful cello and flute. Quite delightful.

Themes revolving around mid-life, reflections and looking forward, abound; on a lucky, blessed life (‘Holy Water’), of perhaps wanting more from life (‘Table by the Kitchen’), of fading lives (‘Welterweight’, which is a cleverly constructed tale). There is even room among all the folk for a steel drum-driven upbeat number (‘South of San Gregorio’); a pity it is so short.

A couple of songs seep into the abyss of mediocrity, but the majority are well told, well-played tales, with enough fine musicianship and good production values to make this a very good album. And almost a great album.

Just a couple of strong songs short of being outstanding