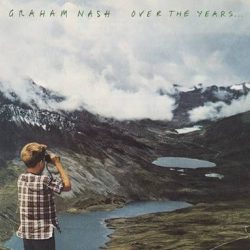 We leave you for the bank holiday weekend dear reader with news that Rhino is releasing a new retrospective of Graham Nash’s work on June 29th in advance of his UK tour dates in July. ‘Over The Years…’ features 30 tracks over a two-CD set and on digital download and streaming services. A 15 track, double-LP version featuring an etching on ‘Side Four’ will be released on August 31st. The anthology has been curated by Nash and longtime associate Joel Bernstein and includes extensive credits and liner notes. “It does my heart good to present my songs this way. I hope that listeners will enjoy hearing the demos of my songs – how my demos of ‘Our House,’ ‘Teach Your Children,’ and others turned into the records that have endured ‘Over The Years,’ how I started writing them, and how they became the now familiar recordings when they were released,” said Nash.The collection highlights songs from the CSN debut album (‘Marrakesh Express’) and its successor album ‘Déjà Vu,’ for which Neil Young joined forces with CSN (‘Our House’ and ‘Teach Your Children’), as well as songs from subsequent CSN albums (‘Just A Song Before I Go’ and ‘Wasted On The Way’). In addition, the collection highlights songs that Nash recorded for his 1971 solo debut, ‘Songs For Beginners,’ including ‘Military Madness’ and ‘Simple Man,’ and includes unreleased mixes for two other songs from that album: ‘Better Days’ and ‘I Used To Be King.’ The most recent recording on the compilation is ‘Myself At Last’ from Nash’s 2016 solo album ‘This Path Tonight.’ Two tracks from his albums with David Crosby (‘Immigration Man’ and ‘Wind On The Water’) are also included in the collection.

The CD version of ‘Over The Years…’ includes 15 demo recordings, 12 of which have never been released, including the 1968 London demo of ‘Marrakesh Express,’ rejected by the Hollies and setting the stage for Nash’s relocation to Los Angeles and the next chapter of his life.

“Over the Years…” CD Track Listing