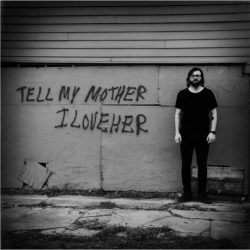 Pain, loneliness and despair have often driven the creative muse and this is currently the case for Nick Costa. The end of a long term relationship provides the point of reference for his latest work. ‘Tell My Mother I Love Her’ is his second album of original songs, with his previous releases being ‘Devastator’ and a moody covers version of Blink 182’s ‘Enema of the State’. On this recording Nick flexes his multi-instrumental musical talents by performing all vocals, guitars, bass, piano, organ, synth, mellotron, and even some of the percussion. The resultant sound is slow tempo, dark indie-pop.

The album may have been written as catharsis and there is a risk that the presence of the listener is incidental, but such is the nature of introspection. Nick explores the gamut of feelings that are representative of the place he is in. ‘I Don’t Feel Like Having Fun’ captures the pointlessness, “Think I’ll stay in my bed, wallow, and continue to dread going out”. ‘Amber Eyes’ is that moment of nostalgic reflection “It took me years to realise everything was fine”. ‘I Always Knew About You’ suggests there is still residual hope “If I burn out, I’m gonna burn out nice and bright for you”. ‘Sicka Tryna Love Ya’ is one of the stronger songs and indicates a degree of acceptance of the position he is in. ‘Caught Feelings’ is the struggle for understanding. Suffice it to say, the whole journey is here.

As a breakup album, sadly this is unlikely to make it into the shortlist of all-time greats. The genre is littered with many classic works that virtually define our emotional expression of this difficult personal circumstance from defiance to despair. The competition is fierce with the genius of Dylan’s ‘Blood On The Tracks’, the shock and rage of PJ Harvey’s ‘Rid of Me’ or the magnificent depression and despondency of The Cure’s ‘Disintegration’ for comparison. In this context Nick settles for melancholic self-pity tinged with vestiges of faint hope.

Presumably this will resonate more if the listener is in the right frame of mind, after all the experience is near-universal. Nick suggests that it “pairs well with autumn evenings, whiskey days, and wondering if you’ll get up to beat the count”. It is likely that every artist will get the chance of a breakup album, but most likely they will only produce one, so that opportunity should justifiably be treated with caution.