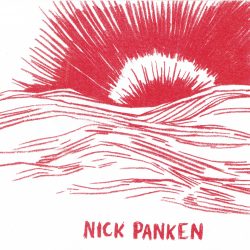 Nick Panken hit these shores supporting Ian Felice on his recent jaunt through the UK and proved compelling as a lone troubadour with a simple rig featuring guitar, vocal and occasional harmonica – and this release follows that template. Available only on cassette (with download code) or via Bandcamp this guy is either wilful or commercially naive – or possibly both! However, that doesn’t detract from the stark beauty of this release.

Opening with the hymnal ‘On That Day‘ Panken’s voice has heft and gravitas that underscores some very beautiful guitar shapes. In fact, by the time we get to the first cover you wonder if it’s really needed but the superb version of Dylan’s ‘George Jackson‘ make you very glad he did.

This album feels like a collection of ancient songs that have been found and rejuvenated. The songs have a Prine-like weight that remain with you – ‘In The Manner That It Came‘ feels spiritual and as if drifting over the hazy Catskills on a winter’s morn as the sun crackles the ice on the lake. It is biblical in its feel. Perhaps it’s the language that Panken nods to with his titles ‘Anew What Has Remained‘ being another that feels hewn from the dull earth. Whatever it is, these tunes stay with you as if old friends recently rediscovered and that’s a genuine songwriting skill.  A real find.