A fine sophomore album that simply gets better with repeated plays 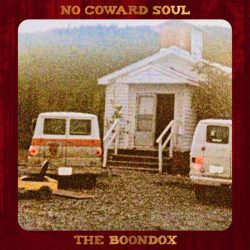 It’s not often that a London based Americana outfit release an album that is full of tales from the more remote parts of Alaska, but No Coward Soul has done so and they have done it in fine style with the release of their second alum ‘The Boondox’.  The link from London to Alaska may not be as tenuous as it first seems given that singer/songwriter Brad Schmauss grew up in the small town of Salcha, Alaska (that’s about 40 miles south of Fairbanks for those with an interest in geography!). The album takes its title from the name of a fine drinking establishment that sits handily on the side of the Richardson Highway (which, for those really interested in geography, is part of the main highway into Alaska from the Canadian Yukon).

Alaska is a wondrous place and through the course of the album, Brad Schmauss and the rest of the band regale the listener with tales of the weird and wonderful people and creatures who inhabit that stunningly beautiful but somewhat hazardous wilderness.  Stories such as that of the bush pilot who was renowned as the worst flyer in Alaska, but the best at crashing, the tale of a missing schoolgirl that set off recriminations and second glances into the shadows of the woods. He talks of cold dark nights trying to keep the winter’s wolves from the door, an Alaskan cupid’s aim gone awry, and stories of a bush man lost and out of place in the city.

Speaking about the album, Schmauss explains, “I wanted to make an album that reflected my experiences growing up in the Alaskan woods. It’s a unique, atmospheric and sometimes strange environment. I wanted this collection of songs to tell stories that reflect the place as I knew it. People who live there will understand many of the references and I hope all our other listeners can journey there in their imagination: to a vast and beautiful landscape filled with dangerous beasts and lost souls”

No Coward Soul comprise Brad Schmauss on lead vocals, guitar and piano, with additional vocals, mouth organ, ukulele and glockenspiel from Sarah Phillips, guitar, piano and backing vocals from Martin Gray, bass guitar from Jules Clement Smith and drums and percussion from Sam Kinsey.  The band should be proud of this excellent sophomore album and ‘The Boondox’ combines fine vocal harmonies with a wonderful variety of well-crafted songs that are nicely varied in tempo and style and there really isn’t a poor song among the 10 fine tracks but particularly noteworthy are ‘King of the World’, ‘Cinco De Mayo’ and ‘Bullseye’.

About Jim Finnie 57 Articles
Resident of the frozen NE of Scotland, with a penchant for climbing high mountains and exploring crazy countries that others avoid. I also sorta like music.