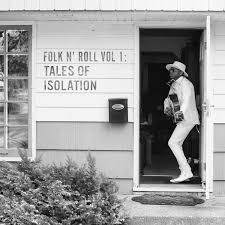 Nairobi born and Minneapolis resident Ondara unveils his second album, and a powerful thing it is. Opening with the plaintive ‘Pulled Out of the Market’ Ondara nails his colours to the mast early on as a commentator for the working man and woman as ‘a factory worker, market worker’. There is a Springsteen simplicity to the acoustic guitar and vocal call and response. Big and open sounding just acoustic and voice with wide-open emotion; by the time the harmonica comes in it is clear this is a response to ‘Born in the USA’, clearer of attention and perhaps less allusive but similarly aligned in tuning and conviction.

‘Folk N’ Roll No.1 : Tales of Isolation’ is a collection of songs written and recorded whilst in lockdown and lyrically they reflect the issues generated by the crisis for the everyman. As such they are not only interesting documents but in many cases arresting. The instrumentation is stark; this is no bedsit editing orchestral work. The simplicity only serves to emphasise the ‘tales’; in one instance of the inability to pay the rent when sent home from work; another the bars not being open for date night and another ‘From Six Feet Away’ the idea of being unable to touch and having to love from a distance.

Ondara’s vocals are front and centre throughout, a dynamic voice that ranges from the cheeralong roar of the opener to an almost clear falsetto. Ondara is clearly in thrall to the twin towers of Dylan and Springsteen and perhaps even Tracy Chapman in some of the delivery particularly on ‘Isolation Anonymous’ but there is also a striking originality at work here. There are rough edges and at times the lyricism is heartfelt rather than polished (we even hear a cat at the start of one track) but this is a document of a particular time and series of events, and it becomes all the more powerful for its lack of production values.

Will it be listened to when we have moved on? Absolutely it should, but it will also remain a powerful document of a single moment in time. Here is a new and different voice speaking about his experiences and emotions at this time, and his thoughts and tunes will resonate with many.

A powerful snapshot of our times