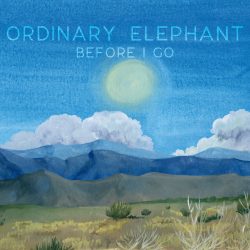 Crystal Hariu and Peter Hanmore are the married couple that are Ordinary Elephant and this is a very considered and often stately work. The album seems to be surfing some sort of zeitgeist in Americana at the moment. Simple, folksy arrangements using guitar and banjo as a songwriting pairing without drifting too close to the Earl Scruggs bluegrass thing. This Is The Kit could be a handy signpost here. All the songs are tightly constructed with the basic instrumental pairing providing the back bone to all the songs.

Additional colouring is selective and measured and inevitably raises the game. Highlights include Highway 71 with it’s brushed snare and elegiac fiddle as the song laments the destruction wreaked on a community by the wildfires that ripped through Bastrop, Texas in 2011. The gentle harmony singing effective and affecting. Leaving Kerrville with its pointed lyric about the happenstance of life’s events written in the aftermath of the of a road traffic accident when leaving a gig and the reflection of how on the smallest of things life can be irrevocably changed.

This is a lovely album full of some heartfelt singing and beautiful arrangements hung together with a potent lyricism that is all too rare. Go buy.