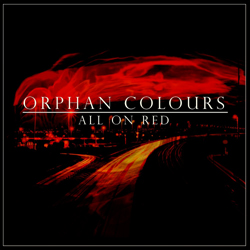 “Your friendly neighbourhood Americana supergroup,” they say, and while one might think that it’s a tad pompous there’s an element of truth in this statement. From the ashes of ahab, a band who always seemed to be on the cusp of making it, Stephen Llewellyn, Dave Burn and Graham Knight eventually teamed up with ex Noah & The Whale (another on the cusp band) guitarist, Fred Abbott and Steve Brooks (from Danny & The Champs) to form Orphan Colours. An EP release in 2016 was well received and now we have the debut album, an album forged in the face of adversity. As Llewellyn explains, “At the end of 2013 both ahab and Noah & The Whale had been chewed up and spit out by the music business.” Despite this, Llewellyn was determined to give it another go, the new band revved up and raring to go, the album title referring to his final gamble as he bet all on the band’s success.

It’s fair to say that there’s been a bit of a buzz around this release. Having signed to the excellent At The Helm Record label, received an exclusive first airing of their single, High Hopes, here on AUK, and set to showcase at the upcoming AMA UK awards, Orphan Colours are hitting all the right buttons. Thankfully, the album, in the main, lives up to the pre expectations, being an extremely listenable slice of, what, for want of a better word, we’ll call Americana, ranging as it does from chunky horn fuelled rockers to more delicate acoustic rambles.

They open with the brassy Start Of Something, a song that kicks off somewhat in the manner of Danny & The Champs with rasping sax and slide guitar battling away. A punchy and dynamic song with fine harmonies and several sax solos it certainly proclaims that the boys are back in town. High Hopes then chimes in, riding on a fine bass driven pulse, power chord guitar thrashes and a sinewy lead guitar – almost like a mash up of The Byrds and The Who recording at Stax. The horns return for the dramatic opening to Goodnight California which, like the opening song, veers from soulful verses to horn fuelled mayhem with guitar and organ sashaying away like The Faces on a good brandy night. Coming in at just over the five minute mark here it’s the type of song one can imagine becoming a live favourite, stretching out on stage and there’s an excellent short feedback filled outro.

Three songs in and the album’s been punching above its weight so far. They take a breather for the mainly acoustic Loving Kind, a mandolin dappled string driven love song which gives full rein to the band’s harmony singing before venturing back into the rock arena with Waiting. This starts well with a synth drum sound and acoustic guitar promising to sound like something Pete Townshend might have come up with but soon enough the band glide into U2 territory, a soaring guitar and epic vocals reminding one of an eighties rock song and to my mind not half as good as the opening triumvirate. Indeed the remainder of the album is overshadowed by the promise of the opening songs although Lonely, Sarah and Inside Out bring out the best of their delicate side and there’s a fierce Tom Petty feel to Renegade with its barrage of guitars over a pummelling rhythm section. Finally, there’s a spectacular dip into the bayou on the Southern blues and soul of Sun Is Rising, another song that one imagines becoming something of a live anthem with its mighty guitar, organ and soulful wailing recalling the likes of Delaney & Bonnie.

Certainly more muscular than anything Ahab ever came up with, All On Red is an album which pulsates with a fierce energy, the band firing on all cylinders with only the occasional backfire.

Bold and brassy debut from denizens of the UK Americana scene