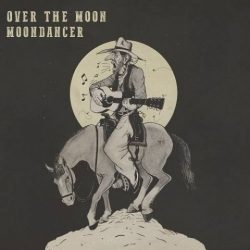 y simple debut album of old time music from the couple Suzanne Levesque and Craig Bignell hailing from the Rocky Mountains in Alberta who call themselves Over The Moon – and why not. There are ten tracks here, half of which are self-penned including a track entitled Over The Moon, a western swing style track featuring great fiddle. Recorded at home there is certainly a strong sense of place in evidence something clearly shown in the title track, the wonderful Moondancer by one of the fathers of Canadian music, Ian Tyson. Another great cover takes the form of By The Mark by Gillian Welch and David Rawlings which is given he full bluegrass treatment with great harmonies and finger style banjo to the fore.

There are two further great swing tracks, You Don’t Even Know and Alberta Moon which both feature great clarinet playing – something not often uttered when describing Americana music, but it definitely works. With a nod to the French connection in this part of Canada That’s How I Learned To Sing The Blues has an accordion accompaniment to the vocals which gives a feeling of being crooned to in a Parisian café.

Turtle Mountain documents an incident known as the Crowsnest Pass disaster in the Canadian west of 1903 known as the Frank Slide, a haunting piece which has echos of Steve Earle’s The Mountain. Environmental concerns are on show in The Hills Of Grey County a piece about standing up to developers who want to exploit an area of natural beauty.

This is a terrific album which is currently a self release but which surely deserves the attention of an established label with a distribution deal to get this out into the wide world. If old time music is your thing then there will be few better albums around this year.