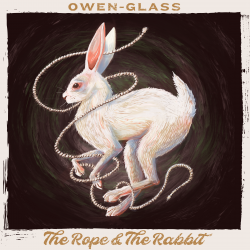 One of the best albums of the first half of 2019, Owen-Glass’s ‘The Rope & The Rabbit’ keeps on giving; each song is better than the last.  Delicious, hushed harmonies hover above folk-pop arrangements that stay consistent in mood throughout.  The result is a mesmerizing, hazy mix of lazy, jazzy-funk dreamscapes filtered through an East Texas awareness of gospel, blues, country, and soul.  Imagine members of the War on Drugs jamming with Syd Barrett-era Pink Floyd on some 13th Floor Elevators deep tracks.

The thematic scope and flawless execution apparent on ‘The Rope & The Rabbit’ belies the fact that it’s Owen-Glass’s debut album, and highlights abound. The politically-charged ‘Paper Chains’ grooves along like George Clinton conducting the coda to ‘Can’t You Hear Me Knocking’ while the deceptively cheerful pop-bounce of ‘This Room’ hooks you and doesn’t let go. On the country-folk side, the clever ‘Devil Don’t Mind’ gives the devil his due, so-to-speak, over a Neil Young ‘Harvest’-era groove.  Light reggae is the foundation for ‘General Butler’ while ‘Saint’ recalls the trippy garage-band psychedelia of groups like the Chocolate Watchband awash in reverb and wah-wah.

With ‘The Rope & The Rabbit,’ Owen-Glass has set a pretty high standard for themselves – one they can surely meet or exceed next time.  It’ll be a pleasure watching them do just that.