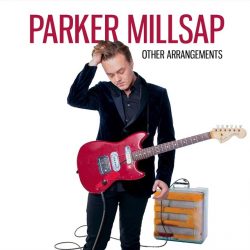 One of the interesting things about reviewing new music is that, every so often, an artist will throw a real curve ball with a new recording; and that’s exactly what we have here on the latest release from Parker Millsap, ‘Other Arrangements’. In 2014 Millsap was hailed as one of the Emerging Artists of the Year by the Americana Music Association. He has been feted for his traditional approach to roots music, with his last two albums both going to number one in the US Americana charts and his 2016 album ‘The Very Last Day’ being nominated for Album of The Year at the Americana Music Honours & Awards. To date all his recordings have been about a simple acoustic guitar, bass and fiddle combination.

The first indication you get that things might just be that little bit different this time round is the album cover, showing Millsap sporting a very red Fender Bronco electric guitar. When the chunky, Blues/Rock riff of opening track, ‘Fine Line’ kicks in you know Parker Millsap is taking things in a somewhat different musical direction! This is a belting start to what is a very good record. ‘Fine Line’ is muscular Blues/Rock unlike anything you’ve previously heard from this artist, all angular stabs and swaggering vocals – “I’ve been walking the fine line between the form and the function, between the gall and the gumption, between feelin’ and touching”. But this album is no attempt to “do a Taylor” – he hasn’t abandoned his roots based music to cash in on a more commercial market – this is much more about flexing his musical muscles and moving out from his previous limitations. He’s still supported by his regular bandmates; Daniel Foulks on fiddle and Michael Rose on bass but this time they’re joined by Paddy Ryan on drums and they all seem to be having a fine old time of it. It really does sound like this record was a lot of fun to make – there’s an exuberance that rings out from every track.

Parker Millsap clearly knows his way around a good blues lick and blues based songs are well featured here, especially on the excellent ‘Tell Me’, with a guitar sound that’s reminiscent of Peter Green era Fleetwood Mac and classic blues style lyrics – “I’ve got a heart it’s beating for you, I’ve got a scar from bleeding for you” and there’s also a beautiful blues guitar intro to ‘She’ before the song moves into almost Gipsy Jazz territory. Elsewhere we have a Beatles-esque rocker in ‘Let a Little Light In’, a gospel-influenced ‘Coming On’ featuring some fantastic harmony vocals from, among others, Odessa and Shirley & Calvin Settles and a track ‘Some People’ that sounds like something Billy Joel might have written in his angrier moments. It would be interesting to know whose record collection Parker Millsap has been listening to!

It’s not all upbeat tracks and Millsap hasn’t turned his back on his acoustic roots; there are still a few tracks where he puts aside his electric guitar for some fine acoustic picking, such as the tracks ‘Singing to Me’ or the album closer, ‘Come Back When You Can’t Stay’, which was co-written with Jillette Johnson, who also contributes a beautiful harmony vocal. That said, the whole album is that much more sonically solid than his previous output and the title track ‘Other Arrangements’ is, perhaps, the best demonstration of this. It’s a good, hefty track with a great build up and some terrific interplay between guitar and fiddle. It really captures the feel of the whole album.

This is a good album and a very clever move from the artist. His earlier work has established his credentials as a musician and now he’s extending his boundaries as a writer and player, showing that he has more tricks up his sleeve and that he can’t be categorised by what’s gone before. It’s going to be genuinely interesting to see how he develops from this point; all the evidence suggests that this is an artist with a big future ahead of him.