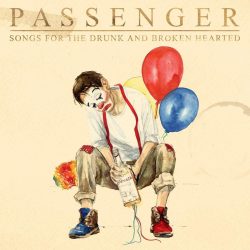 It’s been three years since Passenger’s last studio album “proper,” an unusual length of time for Mike Rosenberg given how prolific he is as a songwriter but then ‘Songs for the Drunk and Brokenhearted’ was originally due for release last Spring before the world spun off its axis. The delay and global situation allowed the album to mutate into a different record than the one which would have been released, and while we’ll never know what that record would have sounded like, the intimate and reflective ‘Songs for the Drunk and Brokenhearted’ is an album which feels like it was made for the times we’re in right now.

They say that rock deals with generalities and country specifics, and if that’s the case then Passenger’s recent output has counter-intuitively felt more country-leaning with its increasing use of steel guitar while dealing with broader, perhaps more generalisable points, with lyrics less shoehorned into crowded verses but given space to breathe. And ‘Songs for the Drunk and Brokenhearted’ is fundamentally an album about love and people, written in the aftermath of a breakup, with stories about the marginalised, not in the sense of class or identity, but of human beings often at their lowest ebb.

The album doesn’t perhaps have quite the same appeal as its predecessor ‘Runaway’ for an americana audience, but it still hangs together as a strong collection of folk-leaning tracks albeit with clean production, and indeed contains three of the best songs he’s ever written: opener ‘Sword from the Stone’ echoes the isolation so many of us have experienced during the last year with a melody which surely is the harbinger of a bigger radio presence than he’s had of late. ‘Remember to Forget’ deals with that guy you can’t get rid of in a bar, its subject pictured with compassion and empathy, and those opening bars it’s impossible to remove from your brain once hearing them. And the title track is lyrically as sharp as anything he’s written (“For the joker laughs along and the jesters outsmarted, The gambler tries to win back what he’s lost”), and an arrangement which allows the song’s twisting chord changes to fly. There are nods to Johnny Marr on ‘What You’re Waiting For’ and James Taylor on ‘The Way That I Love You’, even Knopfler at times, but for all the musical references Rosenberg’s voice is so distinctive that his sound really does feel like his own. It has to be said too that for all the magic of hearing him with just an acoustic guitar, the band on ‘Songs for the Drunk and Brokenhearted’ achieve that rare feat of sounding tight but incredibly warm at the same time. This is a record, like all the best americana, to be consumed with a bottle of whiskey at one in the morning.

The album finishes with the almost wistful ‘London in the Spring’ – after all the introspective turmoil, it’s a song with a sense of regret but which looks to the future: “It often seems to me, we spend our lives talking foolish, running blind, And we forget how to enjoy the simple things.” It’s the hope at the end of this difficult and for some devastating winter which drives people on, and for all the sadness in his songs, Passenger has always been about seeing the best in humanity – the importance of our kindness to strangers and to ourselves. Stay home, protect the NHS, buy the new Passenger album.

About Mark Whitfield 1520 Articles
Mark Whitfield has been Editor of Americana UK for the last 20 years while also working in public health as his day job, which has been kind of busy recently.