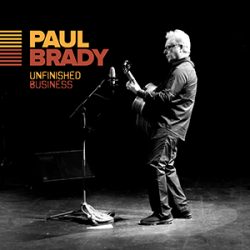 With Bob Dylan having declared Paul Brady to be a “secret hero” of his, you know there’s got to be some serious pedigree from an artist in a career spanning a period of some 54 years now.

‘Unfinished Business,’ Brady’s 15th solo album, features nine new compositions and two traditional folk songs. After a hiatus of 7 years since the release of his last album ‘Hobart Dooba,’ the music on ‘Unfinished Business’ is as eclectic as many of his previous studio releases, moving from the jazzy influenced title track, with lovely shared harmony vocals – to more uptempo, humorous numbers such as ‘I Love You But You Love Him.’ The latter starts off like a paen to shared domestic bliss with Paul Brady singing the merits of his and his respective partner’s differing interests with clever wordplay – until the payoff chorus kicks in with, “I love you, but you love him.”

The record sags slightly in terms of quality after the first couple of numbers, with ‘Something to Change’ and ‘Say You Don’t Mean’ sounding a bit repetitious, but the album is at its very best with the slower, more reflective numbers, particularly the album stand outs, ‘Once In A Lifetime,’ (about the redemptive power of love), and the reflective ‘Oceans of Time,’ which has a lovely flute solo.

Paul Brady’s always been renowned for being a strong interpreter of traditional covers such as ‘Arthur McBride’ (considered by many to be “the” definitive version) and ‘The Lakes of Pontchartrain,’ and this is a feat he repeats to great effect on this album with his rendition of two songs, ‘The Cocks Are Crowing’ – and the final track on the album, ‘Lord Thomas and Fair Ellender.’

The breadth of music on offer on ‘Unfinished Business’ is mightily impressive and proof that even after such a long time away, Paul Brady still has much to offer. Bob, no doubt, would still approve.