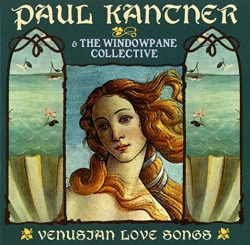 Paul Kantner was one of the original hippies of the 1960’s and champion of the counter culture being an integral part of Jefferson Airplane and Jefferson Starship. An interesting character and activist he was an important musician of that era passing away in January 2016 leaving a fascinating musical legacy of which this double album is a part. Involving an informal grouping of musicians and artists known as the Windowpane Collective this was his second album offering and was intended for release shortly after it was recorded in 2011 to coincide with St Valentines Day, hence it is presumed the title of the record. However, no release came in Kantner’s lifetime. It is certainly eclectic with twenty-one tracks and two demos featuring a core of musicians and many guests on vocals.

The opening track is a haunting rendition of Pride In The Name Of Love which morphs into A Dream Of Miracles which features a major chunk of Martin Luther King’s “I have a dream” speech set against a backing track based on the original Miracles tune and as such has the power to move. The Beatles All You Need Is Love is also here which is followed by Love Theme From Bladerunner so by now you are getting the nature of the work. The style varies from the synth of Vangelis in the Bladerunner track to folk in The Trees They Do Grow High, a traditional song, and almost verges on electro in places. This all makes for an interesting work but inevitably gives a rather disjointed feel. Indeed, this is an album that you could put on as a general background piece at a dinner party, pleasant and at times thought provoking but not something that will hook you and keep you coming back for more.
5/10