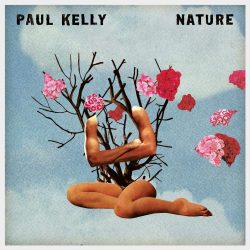 Who else but the seemingly ageless Paul Kelly could have dreamed up the idea for turning the timeless Dylan Thomas poem ‘And Death Will Have No Dominion’ into a brilliant and moving opening song for his new album?  Taking the three nine-line stanzas from that classic work, Kelly has created an enthralling piece of music that is fully in keeping with the intent of Thomas’ original words, whereby death has no control over the human soul.  More impressive still is that this is only one of twelve cracking tracks on a finely crafted piece of work. That’s a somewhat deep introduction to Paul Kelly’s latest release ‘Nature’ but actually it’s a perfect example of the raison d’etre of the entire album.

In addition to putting music to some of his own original poems, Kelly has taken works from five literary greats, Dylan Thomas, Walt Whitman, Sylvia Plath, Gerard Manley Hopkins and Phillip Larkin and turned them into fantastic songs.  For good measure, he has included a powerful homage to the Aboriginal leader and activist Charles Perkins, with the inclusion of ‘A Bastard Like Me’ and somehow managed to meld all of it into a seamlessly integrated and cohesive whole.

Kelly explains what holds it all together “What links them all is the natural world — trees, birds, animals, plants, dust, desert, water —and human nature’s small place in that world. Most of the pieces were written over the last four years in and around the recording sessions for The Merri Soul Sessions, Seven Sonnets and a Song and Life Is Fine. I didn’t realize I had the makings of another album until I put the songs in a folder and saw the titles staring me in the face. Sometimes you don’t know what you’re doing until you look back.”

This isn’t the first time that Kelly has gone down this particular road of putting poems to music as previous albums ‘Conversations With Ghosts’ and ‘Seven Sonnets & a Song’ were created in a similar same vein.  As usual he gets excellent support from his talented band with Peter Luscombe on drums, Bill McDonald on bass, Ash Naylor and Dan Kelly on guitars, and Cameron Bruce on keyboards, while other vocals are provided by Vika and Linda Bull, with his daughters Madeleine and Memphis Kelly, Alice Keath and Kate Miller-Heidke also contributing.

‘Nature’ is available in two different versions. The standard version is the 12 song, single disc CD and vinyl and the limited Deluxe Edition is a major bonus for Paul Kelly fans with Disc 1 being the 12-song ‘Nature‘ album and Disc 2 being a 27-song DVD, capturing 2017’s triumphant show from the forecourt of the Sydney Opera House.

Quite simply, ‘Nature’ is an excellent album and if you didn’t know in advance you would be hard pressed to distinguish between Kelly’s self-penned efforts and the poems from the five greats that he has adapted into contemporary modern day songs.

There isn’t a bad track to be found and with his 64th birthday looming large in January, Paul Kelly is showing no signs of letting up.  With the Order of Australia he received in 2017 for his distinguished service to the performing arts and the promotion of Australian national identity safely in his hip pocket, long may he continue producing music like this.

Another great album from the indefatigable Australian maestro

About Jim Finnie 57 Articles
Resident of the frozen NE of Scotland, with a penchant for climbing high mountains and exploring crazy countries that others avoid. I also sorta like music.