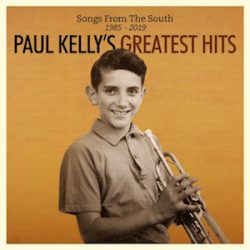 It’s a point of pride for Australians that they don’t beat around the bush. So when it comes to reviewing ‘Songs From the South 1985-2019’, by one of that country’s greatest modern-day singer-songwriters,  you could maybe get away with just writing “this album is stunningly and consistently brilliant, go out and buy it today.” (That way if the Editor got sarky about whether this new-found brevity of style had anything to do with the outgoing ‘festive season’ then  you could claim you were reflecting the Aussies’ no-nonsense approach to life and that the comment summed up pretty neatly what you thought, anyway.)

Failing that, an extended review would probably start by exploring why Paul Kelly has remained a household name in Australia for an ongoing career that stretches way back to the mid-1970s. It could be because, to judge from this 43-track-album, on the one hand you never quite know what Kelly’s going to come up with next, on the other you know that it’s pretty darn certain to be worth a listen. The styles on ‘Songs from the South 1985-2019’ alone range from New Wave, indie guitar music, powerpop, acoustic folk, rock, classic rock’n’roll, bluegrass, bits of soul and a fair slab of country through to some Gospel-style a cappella, and even that long a list probably has a few gaps. However,  it’s also true that the album, a shade mysteriously, doesn’t have anything from the first ten years of his career prior to 1985, back when Kelly was with his first band, The Dots and reportedly cranking out pub-rock and ska-tinged ditties.

But it’s not just Kelly’s longevity or huge breadth of styles or blatantly obvious tried-and-tested talent for songwriting that’s helped him become an integral part of multiple generations of Australians’ musical furniture. More likely it’s because the standout feature of all his work is his lyrics: his unfailing ability to get deeply and unpretentiously under the fabric of normal people’s lives, with a concision and power that it really feels like almost every word in every song counts for something. As a  saying rather more worn out than Paul Kelly – his latest album dates from 2019 –  puts it, this guy really tells it how it is.

To go back for a moment to ‘the so-called festive season’, ‘How To Make Gravy’ is arguably the most striking of all of Kelly’s chronicles of modern-day Australian living – it’s certainly one of his best-known – and consists of one side of a phone conversation from a prisoner experiencing his first Christmas in jail.

“I guess the brothers are driving down from Queensland
And Stella’s flying in from the coast / They say it’s gonna be a hundred degrees, even more maybe / But that won’t stop the roast.”

Gradually finding his voice in what is clearly a really tough conversation, the prisoner then lists the ingredients for his treasured gravy-for-Christmas-roast recipe (it’s a real one, courtesy of Kelly’s ex father-in-law) down the phone, and has a bit of a chuckle about his sister’s former boyfriends:

“Do you remember the last one? / What was his name again? / Ah, just a little too much cologne / And Roger, you know I’m even gonna miss Roger / ‘Cause there’s sure as hell no one in here I want to fight.”

All in all, ‘How to Make Gravy’ provides a kind of telescopic zoom-in on what life in any normal Australian household at Christmas could be like, fused in with some wrenchingly personal moments from somebody  finding themselves freshly incarcerated – like when the prisoner pleads with his brother not to hit on his wife when they’re having a Christmas dance, and then instantly backtracks, adding:

“I didn’t mean to say that, it’s just my mind it plays up /
Multiplies each matter, turns imagination into fact.”

Amazingly – and surely hence his longstanding appeal – for four decades of writing, that gritty, witty, blindingly vivid side of Kelly’s work has never faded out, to the point where it naturally gains the label of being a universal kind of music, because in 40 years, almost everybody can relate to something Kelly’s written about. Take the words from ‘Midnight Rain’, for example. Who amongst us more, ahem, senior folk hasn’t woken up for no good reason in the middle of the night, wandered around in their dressing-gown, put the kettle on and listened to some music “but not too loud cos the neighbours complain” and wondered idly about a former lover/partner, where in the world they might be – “is it morning or night?”– but then concluded  with thinking something inexcusably banal about them, like “by the way, have you still got your stupid car?” Guilty as charged.

Rather than being a constant presence over four decades, the Americana influence in Kelly’s music floats in and out after some rather clunky early starts – “And his heart was singing like a  low-down guitar” he half-mumbles mid-way through ‘To Her Door’, prior to a chugging twanger of a solo. There’s a big dip into bluegrass in one of his side projects in the album containing ‘Our Sunshine’ in the early noughties. But one of the most powerful of his later songs, ‘Letter in the Rain’ has a classic slow-paced country ballad format, and some lyrics that stunningly, bleakly capture the impermanence of everything – love, Nature, memories, you name it: give it a few years and you’re left clinging on to fragments.

“The frost is gone now from the hill like a vision in a dream / You never know when glory will come again / I remember her downstairs / And her braid of nutbrown hair / All the rest is just a letter in the rain.”

Very often what Kelly does is drill into chapters of much longer lives, with only hints at what may be to come –  like the kid sitting in the back of a car on a long drive on ‘They Thought I Was Asleep’, listening to his parents break down in tears over some incredibly sad subject, but what it is never gets revealed. Or take the estranged husband coming to his former family home in a taxi in the aforementioned ‘To Her Door’ and the final verse ending with him wondering whether his kids have grown so much in his absence that they might not all still fit into a single photo. Ending with ragged edges on the pictures, the songs paint like that is good, partly because it means you’re being treated to an inside slice of somebody’s ongoing life without ever risking indigestion by getting an information overload, partly because what’s left unexplained somehow intensifies the images of what we do know.

That said, sometimes you do run into the same main character on other songs a couple of albums later. The narrator from ‘To Her Door’ re-appears in the same role on ‘Love Never Runs On Time’, a kind of road trip to nowhere, and has already starred on ‘How To Make Gravy’. (There’s an interview somewhere where Kelly wryly describes the main man as “a bit of a fuck-up.” But you don’t find out where he ends up on his road-trip or why he is actually doing time in jail or whether he gets back with his ex-wife – and it doesn’t actually matter.)

Just like the best of Americana, apart from raw social observation, there’s plenty of space for dry humour as well, like Kelly’s hilarious account on ‘Every Fucking City’ of an off-on love affair stretching perilously thin on an Australian’s non-stop European backpacker tour: “I know how to order sandwiches in seven different languages, and every fucking city looks the same.”

But the humour can’t hide some real angst, like in ‘Sweet Thing’ where an abused woman reflects on her seriously mixed and mixed-up feelings for her partner. Kelly can also turn out some gripping social protest folk songs – ‘From Little Things Big Things Grow’ is about Australia’s indigenous people and one of the fundamental Aborigine land rights struggles back in the 1960s. Then towards the end of the album, there’s a track from a series of Shakespearean sonnets he’s set to music, and for once that old PR cliche about “breathing new life into something ancient” actually feels true.

If you’re looking for GB musical parallels, there are definite similarities with Squeeze or the late, great Ian Dury, for variety of styles, humour, lyrical brilliance and sometimes acid social insight. But perhaps there’s a clearer UK link to one of Kelly’s heroes, the twentieth-century poet Philip Larkin, about whom Kelly once said in an interview with popmatters.com “the beauty of Larkin is he seems so almost conversational but there’s a great discipline and technical skill in his work that goes unnoticed”, and surely the same goes for Kelly’s often seemingly effortless music too. Like Larkin, Kelly has that knack of pulling out the deepest of lessons from some of the most mundane events without getting overbearing or pompous.

There are a couple of points where you think “time to skip a track”, but it’s kind of personal – because unless you’re a cricket fan, ‘Bradman’ is probably one to miss out, as it goes on for a full eight minutes about this particular star of the sport. Even if there are some good lines in there, “he was more than just a batsman, something like a tide,” there’s just too much cricket history to keep a non-fan’s attention from wavering.  Another two songs, like ‘How I Met Your Ma’ or ‘Winter Coat’ feel a fraction too mawkish. But overall, there are very few bumps in a very long, hugely rewarding, introductory roadtrip through Kelly’s career, and like all great compilations, maybe the best thing of all about it is that there’s loads more where this came from – 20 plus albums’ worth in fact. Not to beat around the bush, if ‘Songs from the South’ are the nuggets, there’s sure as hell some musical gold in them there hills.