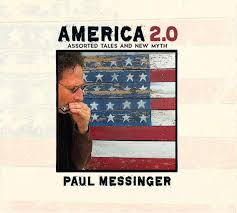 America 2.0 is an extraordinary album that attempts to examine the very concept of what America is in the Trump era and what it means to be part of the great American melting pot. It is massive in its ambition and scope and it very nearly pulls it off. Messinger is patently a very savvy and politicised observer who use his lyrics and devastating harmonica skills to lead his band through a range of styles and tropes encompassing gospel, dustbowl blues, reggae and straight ahead rock n roll.

Opening with the quietly epic title track, the cards are immediately on the table: “Take me to land of the madmen and the poets, take me to the Waffle House at 4am and you will know America.”

On a bed of portentous harmonica and piano, the song is stately and epic but soon dissolves into a ragged rhythm before returning to its conclusion with the repeated refrain: “Mine eyes have seen the glory, take me to America.” ‘The Speaker’ is straight ahead reggae with a dusting of the magical harp, ‘Device Dyslexia’ a slow groove complete with mid-seventies Moog sounds punctuated with spoken word verses and as such sounding a little too muddled.

Messinger rails against his president in the track ‘Lady Liberty’, a funky slow number with a sassy vocal and the killer chorus: “Lady Liberty show me the land of the free… gimme some Common Sense and Courtesy and Decency .. you shouldn’t be grabbed by the pussy” This is repeated and ends with an angry plea. Great stuff.

If this album has a fault, it is that there is so much here, of some many hues that it needs to be listened to, not just consumed, and that is no bad thing. Messinger has a lot to say and it is absolutely worth listening to on both a musical and intellectual level.

Powerful examination of America 2017 from a true artist