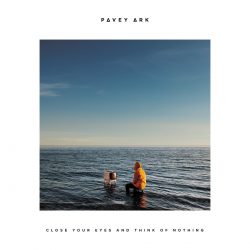 Paved Ark are a Hull-based band revolving around singer-songwriter Neil Thomas. They have supported This is the Kit, played Glastonbury and are now creating a buzz around this, their debut album. The band describe themselves as “alternative folk”, whatever that means. Certainly there is little here that could discernibly be called folk music. What there is, is a set of very well crafted songs largely reflecting Thomas’s personal thoughts and experiences.

The album’s title ‘Close Your Eyes and Think of Nothing’ is taken from a line in The Jam’s ‘Private Hell’. The corresponding title track is about people who go through life seemingly unaware of what is going on all around them, yet are all too often happy in their ignorance. We all know such people and so the song easily resonates. It’s a great song, but here comes the but…the band have chosen a production that involves the heavy use of strings. Rather than augmenting the songs, they have the effect of suffocating them. This is repeated on most of the other songs giving the album as a whole something of a saccharine taste. On the odd occasion where the strings are stripped back the sound is all the better for it. ‘Hidden Hills’ another excellent song, has a more organic feel to it. There is an element of tension to it which is suppressed elsewhere. The song itself is a beautiful observation about meeting someone that you love.

On ‘Jenny Let Go’ Thomas gives his vocals more free range than elsewhere on the album. He has a good expressive voice, the character of which is dumbed down on many songs. This song gives an insight as to what more the band might have to offer. The smothering effect of those strings seems to restrain and hold Thomas back, giving the album as a whole a slow, sometimes sluggish monotone character that is screaming out for a more varied approach and an injection of passion and pace.

Clearly, on the strength of his songs, Neil Thomas and Pavey Ark have a great deal of potential and quite possibly a stunning album in them. However, despite the quality of the songs included here, the album, largely due to the production, disappoints. It would be interesting to hear live or stripped back versions of these songs, as I suspect these would give a truer picture of the artist.

A set of great songs get suffocated by overbearing string arrangements