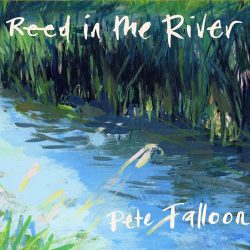 Devonian multi-instrumentalist Pete Falloon debuts as a solo artist with a satisfying album that’s all meat and no filler. ‘Reed in the River’ is an eclectic proposition that sounds folky in its acoustic warmth of mandolin and brushes on the snare drum (Paul Everest on drums) but also groovy with punchy bass lines and bongos.
Falloon’s previous collaborations include a duo with his brother, Mathew (appropriately named Brothers Falloon). Despite the new solo billing, Pete didn’t abandon him. Mathew is the bassist on the record and contributes so many other instrumentation and singing elements, that one can only imagine the brothers are musically inseparable.

For a personnel of only four – Chris D’Adda joins on percussion – there’s plenty of sonic layers to unpack in every song. Arrangements are busy but never overcrowded, and the frequency spectrum is filled intricately. The original electric guitar style stands out in particular, especially when combined with mandolin, as on ‘Contemporary Ways’.

Pete’s vocals are gentle but unflinching, and deliver the lines convincingly. It is the backing vocals that are show-stopping at times, though, with “oohs” and “aahs” that are equal parts Grateful Dead and circa 2005 John Frusciante.

The lyrics don’t break new grounds, and are probably the weakest part of the album. The stories of love, introspection, and yearning for faraway places (or, in case of the instantly catchy ‘Canada in the Fall’, all three at the same time) aren’t too memorable, but they don’t get in the way of the music either.

Overall, compositions on ‘Reed in the River’ are solid throughout, with several songs having serious folk-pop hit potential.

Upbeat folk-pop with feel-good factor turned up to 11.