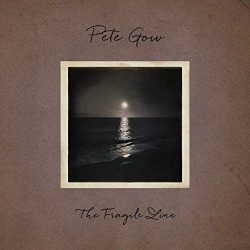 When, almost a year ago, a colleague on this esteemed website reviewed Pete Gow’s debut solo album ‘Here There’s No Sirens’ the only possible criticism to emerge from what was, in the main, a glowing review, was the fact that the album was “a little one note in terms of pace….with no rocky number to break the tension.”

For his follow up to that album Gow, having himself identified that his previous songs made for a pretty depressing set list, has addressed that issue with an even mix of songs that, in his own words bring “lots of light, shade and balance into the live shows.”

So, for every high-tempo number such as ‘Tourniquet’ there is a slower, more contemplative number such as the title track ‘The Fragile Line’. These slower numbers sit much more in line with that previously well received collection and are of a consistently high standard. Beautifully sung and produced, these songs have, at their very heart, brilliant cinematic string arrangements, scored and performed by producer Joe Bennett.

These strings are ever present and, of the rockier, more upbeat numbers the standout is ‘Let’s Make War a Little Longer’. Described as having a string, soul groove this fairly zips along and is maybe the most cheerful sounding song you will ever hear with the word ‘war’ in the title.

Gow has brought just the one cover to this collection, a faithful updating of Warron Zevon’s ‘Lawyers, Guns and Money’, which Pete Gow and the Siren Strings have been playing live on recent tour dates. It suits the style and tempo of the rockier numbers on the album, but when he’s clearly such an accomplished songwriter perhaps there was an opportunity to showcase even more of his own work on this collection of only eight songs. However, as ‘The Fragile Line’ is intended primarily as a companion piece to ‘Here There’s No Sirens’, we’ll forgive him.

The album closes with ‘Poets Corner’, a wonderful reworking of a song from his previous role as frontman for Case Hardin. This song is eight minutes of perfection which serves as a glorious finale to a hugely enjoyable slice of Americana.