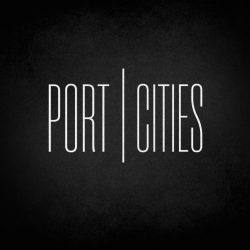 Port Cities is the award-winning combined efforts of three celebrated Nova Scotian musicians –  Carleton Stone, Dylan Guthro and Breagh MacKinnon. They’ve joined together to produce a slab of (modern) Nashville inspired, poppy AOR meets slightly folky Americana. As such it’s inoffensive but decidedly unremarkable. There’s undoubtedly a growing market for this type of just about roots music, but as a sub-genre it falls a long way short of authentic/classic/gritty Americana.

Opener ‘Back To The Bottom’ sets the tone – it’s not a million miles away from something Kelly Clarkson or perhaps Katy Perry might sing. ‘In The Dark’ has a noticeable Fleetwood Mac vibe – telling of a love affair that comes alive after nightfall. The record is thick with harmonies and melodies; it certainly delivers as a catchy, poppy album. The vibe is relentless and the songs often very samey, so much so that it’s hard to determine any highlights. Thematically the album concentrates on lovelorn, night dwelling, troubled souls and the relationships between them. Further into the record, ‘Where Have You Been’ isn’t quite as radio friendly (there’s swears in it) – it’s a little faster and features McKinnon as lead vocalist. Her voice is the ‘edgiest’ of the three; as such her leads make for the more satisfying songs. Closing track ‘The Out’ is again more ‘Tango In The Nightness’ in evidence. With the right exposure, Port Cities could be very big and very successful. Certainly there’s a lot worse out there.