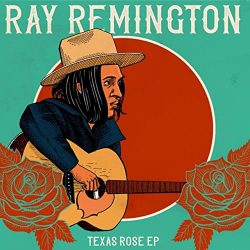 In an era when so many Americana musicians seem hellbent on blurring genres and styles come what may, you can’t help wondering sometimes how much (or little) headway an up-and-coming Americana artist would make these days before succumbing to the general mindset and producing the world’s umpteenth ‘fusion roots’ album. Or maybe it’s not that tough and some folks have just got lazy:  because if California-born Ray Remington’s quest to produce an old-school, uncompromising electrified country sound on his debut EP ‘Texas Rose’  is anything to go by,  some artists can forge their own path right across a good-sized vintage musical prairie or three – and still be going strong.

To be fair, using a hard-edged, neo-Bakersfield remit,  Remington does zip across a few unmarked musical borders on each of ‘Texas Rose”s five tracks – but they’re all such well-established, time-honoured changes of pace and style that none feel particularly far from the album’s spiritual home. As befits a title song with such a traditional-sounding name,  for example, ‘Texas Rose’ itself is a classic mid-paced country ballad, while ‘Shotgun in my Hands’ tips its hat (you feel almost obliged to say the ten-gallon type)  to the world of rip-roaring country blues, and it doesn’t take a  genius to work out what kind of country music ‘Honky Tonk Blues (Come on Baby)’ probably sounds like, either.

In fact – and this is no insult –  no matter which direction Remington heads on his 15-20 minute round trip through five equally time-honoured country canons,  all it takes is about three or four bars worth of each track and you know exactly you’re going, too. But rather than ‘Texas Rose’ being some kind of self-conscious oh-so-ironic hipster retro-fest,  the EP’s whole approach is far too straightforward for that. Rather, it’s highly reminiscent of, say, mid-1980s  Dwight Yoakam in his first and arguably best decade, when the man from Kentucky was the great neo-Bakersfield hope, moving effortlessly between almost every conceivable variation of the genre (the mind-blowingly sad, beautiful Tex-Mex number ‘Buenas Noches from a Lonely Room’, for example) without ever losing that predictable but deliciously sharp-edged and sinewy electric country sound at the centre of it all.

Remington has gone the distance, too, when it came to sourcing some hugely respected musicians as his backing band, too, given it includes Jon McTigue (who plays with Rodney Crowell and Emmy Lou Harris) on drums, and London-born Spencer Cullum and Kenny Vaughan, who work with Miranda Lambert and Kenny Stuart respectively, on guitars. To judge by the quality of the combined result, it sounds like they all positively relished the chance to work on ‘Texas Rose’ ultra-classical material, with Remington’s measured, clean-cut, singing style never threatening to overwhelm their contributions, either. Put it all together and the way backing band and Remington rip things up on  ‘Love You Like I Do’, a full-blasted country-rocker, in particular, is simply exhilarating to hear.

If you wanted to be picky, you could say Remington’s wholesome-sounding voice maybe isn’t quite mean or world-weary enough for the album’s one  grimmer narrative of  jealousy and violence on ‘Shotgun in My Hands.’

But when he lets the emotions get the better of him towards the end of a tearjerker like  ‘No Other Love‘, or when there’s a distinct personal flavour to the song, like in ‘Texas Rose’ when he sings about how much he appreciates what his grandfather has done for him – surely the album’s emotional highpoint –  that singing style doesn’t feel like an obstacle at all. That’s particularly true when Remington simply kicks back for a night of fun on the town in ‘Honky Tonk Blues‘, with lyrics that pay homage, as this whole album does, to some of country music’s elder statesmen and women in the finest of styles.

“So come on baby, there ain’t much time beneath the moon,  Play another one of them Hank Williams tunes.