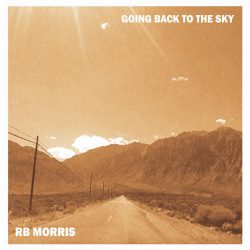 RB Morris, the musical poet, released his latest album ‘Going Back To The Sky’ earlier this year, filled with songs that he wrote on his road trips out west when he was on his youthful adventures. The LP’s first main song is ‘Red Sky’, which really shows off Morris’ style and you hear the intricacies of his song-writing. This is soon followed by a much more upbeat and bouncy song ‘Me and My Wife Ruth’. It’s a fun story about Morris welcoming in a traveller to at least meet his wife Ruth, even if he doesn’t want to actually stay the night. It has this really nice country groove that is extremely popular right now, and is one that modern country acts such as Mo Pitney have been trying to emulate in recent years.

And this fun and energetic vibe continues on ‘That’s the Way I Do’ which shows Morris’ positive outlook on life and how happy he feels to just help anyone out whenever he feels like it. This positive outlook is something that is extremely prevalent across the whole album, as in ‘Old Copper Penny’, where Morris tells us how he isn’t like Silver or Gold, but people are lucky if they get to hold an “old copper penny like me”.

The musicianship is something that also stands out on the album, with Morris’ song-writing talents aided by an all-star band: Bo Ramsey on electric guitar, Greg Horne on Pedal Steel and Fiddle, Daniel Kimbro on bass, Hunter Deacon on drums, David Mansfield on mandolin and violin and Mickey Raphael on harmonica. Their ability is right at the fore in the Van Morrison-esque ‘Under the Cigar Trees’.

Whilst the album is extremely impressive in a lot of regards, especially in the diversity of its tracks, it lacks something to make it truly stand out in the Americana scene. But it is thoroughly enjoyable to listen to a selection of very well-written songs and you can see why he has gained the praises of greats such as Lucinda Williams and Steve Earle.

Brilliant songwriting from a hidden gem