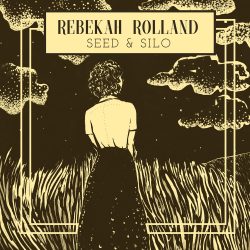 Spoiler alert – the album title pretty much gives the game away here. Inspired in part by the original homesteaders of the Nebraskan prairies; also from Rolland’s involvement with the National Parks Service in the USA, this record is a fully immersed collection of rural American folk/bluegrass, delivered by the clearest, purest of voices.

Mandolin, violin and cello carry the opening track ‘Hole in the Earth,’ where lives and ages are chronicled by the land and the seasons. ‘Little Blackbird/Duck River’ is a thing of beauty: a rolling ballad depicting a happy yet humble prairie homestead in a harsh winter. Tied into the end of the song, ‘Duck River’ is an Irish reel, to which the characters depicted in the song might dance to by the fireside. ‘Bury Me Not on the Lone Prairie,’ an acapella vocal track, is as sad as the title suggests. The final words of a young man lying on his deathbed, whose wishes were not heeded, regardless. ‘Don’t Wait Around’ showcases Rolland’s darting, bird in flight soprano voice against a finger-picked guitar accompaniment. It’s a little less folky than many of the songs, but sits perfectly well nonetheless. Penultimate track, ‘Mulberry Tree’ is a dark ballad, carried along by a slow cello. A former love returns, his once sweetheart is now married; it doesn’t end well.

‘Seed and Silo’ is an excellent set of songs with no flaws or weak links. Rebekah Rolland is a major talent.