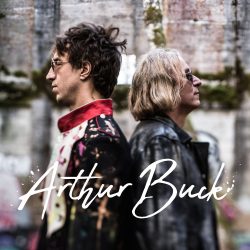 rthur Buck is the coming together of erstwhile REM guitarist Peter Buck and singer-songwriter Joseph Arthur. There was a time back in the 1980s when Buck was knocking on the door of rock royalty. Since the demise of REM he’s been knocking around more generally – working with Mark Eitzel, being part of The Minus and The Filthy Friends, as well as producing his own solo material to mention just a few; he is a man much in demand.

This latest venture, we are told, came from an encounter with his old friend Joseph Arthur when the latter returned to Mexico to pick up a guitar he left after playing a festival. It just so happens it was Buck’s festival and Buck was in town when Arthur went for his guitar…. The two jammed and improvised eight songs in eight hours which they performed publicly just three days later. Not long after, New West Records signed the duo to record an album. The result sounds like two people just seeing where their respective inputs takes them. It sounds uninhibited, quirky and original and with a fresh feel of spontaneity, maybe because Buck notes that when the duo jammed the songs they actually wrote nothing down! No doubt this left room for a few tweaks and fills different from the first incarnation of the tunes.

So what can the avid Americana fan expect? Certainly, the record hovers on the edges of the music usually reviewed on this site. But who can resist when a Dobro wielding muso invites you in to listen to their progeny? And it is certainly not that the record is not rewarding; but it is reminiscent of when Clapton’s ‘Another Ticket’ was reviewed in the music press way back in 1980 under the heading ‘Give us a (lead) break’. Us mere mortals who listen to, rather than make music, respect the need for artists to explore their muse; but so often what we really want is what we love them for. In the case of ‘Another Ticket,’ there was some lovely laid-back bluesy lead, but another ‘Layla’ there was not. And so with this record – underpinning tracks like ‘Are You Electrified’ and ‘Forever Waiting’ is some acoustic guitar which, if you did not know, you might say ‘That sounds a bit like REM’. And there is the rub – the ear is drawn to the ‘A bit like REM’ references – and you cannot help but feel how good it would have been to have one or two tracks that really let that jangly, chiming arpeggio sound rip. And yes – preferably played on a Rickenbacker and not an acoustic!

Ah well, drop the nostalgia and there is some interesting work here – it would be hard to have a Grammy-nominated singer-songwriter (Arthur) and a guitarist of Buck’s brilliance and not be worth repeated listens. This is certainly not all about Buck; Arthur’s influence is there with percussive loops and electronic blips adding to a novel musical canvas. On the other hand, maybe it was the speed of writing-performing- recording that also meant that they did not recruit a drummer. Nonetheless, the song-writing is off-centre in such a way that ‘America Century,’ for example, conjures up the ghost of Bowie in its structure.

Ultimately, the record is a bit like anticipating a Raconteurs record and getting a Brendon Benson solo album. That is to say, it’s good, but after being invited in by that Dobro wielding muso we are more likely to respond with polite, if enthusiastic, applause rather than an emotional shout of “Yeah, that’s what I am talking about.” Arthur Buck are clearly enjoying themselves, it’s just that they left the door ajar for the rest of us rather than throwing it open with a big hearty welcome. Add it to your collection for completeness rather than necessity.