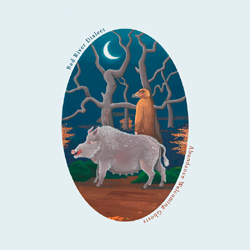 Red River Dialect are a Cornish troupe, a vehicle for the songs of  David Morris, a man who seems to take life quite seriously as he finds inspiration in the nooks and crannies of Celtic legend and misty landscapes. An inward looking soul on a spiritual voyage of discovery, Morris took the band to Wales to record this disc prior to him undertaking a nine month retreat in a Nova Scotia Buddhist monastery and it has sat, awaiting his return, in order for the band to promote it on their imminent tour.

As you can probably guess from the above, the album is not a barrel of laughs. Morris weighs in with a voice which is probably intended to sound portentous, but it tends to drag after a while as his range is quite limited. Behind him there’s a densely populated thicket of violins, guitar, keyboards and rumbling percussion. There are glimmers here and there of Fairport Convention’s groundbreaking ‘A Sailor’s Life’ in the arrangements but ultimately, they again, tend to drag after a while. Meanwhile, the lyrics strain to achieve epic qualities, to capture the majesty of, for example, Snowdonia only to tumble into an interminable repetition of the line, “the closest point in Wales to heaven…” It’s dungeon and dragons as opposed to Tolkien.  There are moments when they tone it down a bit allowing ‘Slow Rush‘ to flow sweetly with Simon Drinkwater’s electric guitar girding the song with some fine licks while ‘Piano’ creeps along in a manner not dissimilar to Bill Callahan.

Overall,  ‘Abundance Welcoming Ghosts’ is as unwieldy as its title.

A folk rock album which takes itself a bit too seriously