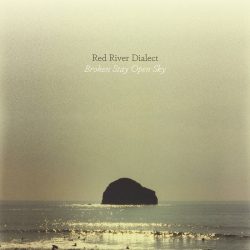 Red River Dialect have their roots in the depths of Cornwall. David Morris started writing songs in 2002 and, from 2006, most of these songs were performed as Red River Dialect, either solo or with a revolving configuration of local musicians. The subsequent years have seen the band grow and develop into their current guise of a six-piece delivering songs, that, in their own words, are ‘brewing a lightly carbonated folk-rock from the psycho spiritual malt of David Morris’s song writing.’

Landscape and imagery are to the fore here so, in, for example, Campana, there are dreams of ‘walking under and through dripping rhododendrons…mowing the lawn…cow parsley scent’ all accompanied by piano, strings and drums providing an atmospheric backdrop. The violin of Ed Sanders and cello of Coral Rose particularly stand out on this closing track and, alongside Robin Stratton’s piano that runs through the heart of the song, it highlights the quality of musicianship on the album.

The tempo and feel of the album fluctuates from track to track. Cinders gives us a gorgeously haunting piece with a memorable piano track combining with subtle guitars and drums to supply a lovely, image driven song with Morris’s lyrics speaking of November mists. Gentler tracks such as this and Aery Thin are particularly evocative and atmospheric and showcase the band at its most effective.  Contrast this with Gull Rock that has a soundtrack bordering on violent that the late, great Sir Terry Wogan might have so eloquently described as, ‘hooligan music’.

There are only seven tracks on the album but they still manage to total 42 minutes giving an indication of the long and sweeping nature of the songs with the fluctuating tempo and feel of many of the tracks acting as a microcosm of the album as a whole. Opening track Juniper/The View perhaps demonstrates this to greatest effect, a 3-minute gentle guitar and violin introduction morphing into a mid-tempo, melodic number totalling almost 7 minutes.

The album is described as ‘atmospheric but deeply rooted, equally concerned with investigating the concrete and the cosmic, both quiet details of the everyday and looming matters of faith.’ If this makes any sense then no doubt this will enhance the overall impact of the album on the listener but, even if it doesn’t, then be content to enjoy the lovely, sweeping feel of much of the music on display here.