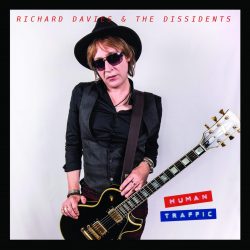 Richard Davies’ career so far has seen him largely occupying a place in the background. He has done session work for various artists but is better known as guitarist for Brit-Popsters Tiny Monroe and more recently as part of the excellent London-based Americana act The Snakes. With ‘Human Traffic’ Davies steps out of the shadows to showcase his songwriting and vocal talents as well as his trademark guitar. The result begs the question as to why it’s taken him so long? as he has produced a very accomplished album of catchy garage rock and power-pop.

One glance at the album cover, with Davies looking like a refugee from CBGBs in the 1970s, immediately conjures up a perception in the mind of what you might expect to hear. The album’s edge and energy certainly nod towards that era. Davies’ sound is much more refined though, with elements of Petty, Springsteen, Alex Chilton and particularly Paul Westerberg to it  These names are quoted only to give an indication of what to expect from the album.  This is not a derivative work, moreover Davies has drawn upon  many such influences to construct a sound that is distinctively his own.

The songs on the album are mostly Davies originals including the re-worked ‘Under the Skin’ from the Tiny Monroe days. Also included are a cover of Alejandro Escovedo’s ‘Heartbeat Smile’. This should not come as a surprise as Escovedo, although generally regarded as an Americana artist, like Davies has an indie-rock background.  The other non-original is ‘Lay Me Low’, an arrangement of an old Shakers hymn dating back to 1838. The Shakers were an 18th century American Protestant sect who believed in the communal ownership of property, that men and women were equals and in celibacy – well two out of three ain’t bad, as someone once said.

The quality of Davies’ own compositions is consistently good, making it difficult to identify a stand-out track and certainly there are no weaker ones. The subject matter is largely personal feelings and observations. Davies himself explains: “Some of the songs are about me, some of them are about other people, but they all capture reality as I see it”. The opening and title track ‘Human Traffic’ demonstrates this. A song about a relationship it reflects that “time keeps slipping through our hands/we are castles made of sand”.  ‘Long Road to Your Heart’ explores similar territory: “Because it’s taken so long/and life’s been hard/it’s a long road to your heart”.  The personal nature of the songs adds to the conviction with which they are delivered. There is both a swank and a vulnerability in Davies’ voice.

‘Human Traffic’ represents Davies’ first outing as front man and writer, but it would be misleading to see his solo debut as a songwriter album. It does contain an agglomeration of accomplished compositions, but he hasn’t left his guitar at home. It’s there, if not always centre stage, then never far from it. First and foremost, this is a rock ‘n’ roll album, and a damn fine one too.

An impressive debut full of edge, energy and great songs