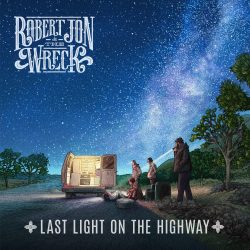 Album opener ‘Oh Miss Carolina’ sets out Robert Jon Burrison’s manifesto. A Rolling Stones guitar riff to kick it off, a bit of Grateful Dead piano, a Lynyrd Skynyrd guitar solo and southern soul harmonies. Robert Jon and the Wreck are five albums into their career and are very much in the southern rock tradition that pulls influences from Memphis, Nashville, and Muscle Shoals. ‘Work It Out’ is country-soul with a sax solo that channels Clarence Clemons. A slightly weaker song ‘Can’t Stand It’ pulls it back with an Allmans style twin guitar break.

The guitar playing really stands out on this album. Lead guitarist Henry James has digested the usual influences for a modern guitarist, Warren Haynes, Joe Bonamassa and is well on the way to perfecting a unique style. He just needs to damp down the Skynyrd and Allmans sounds a bit. And then there is Burrison’s voice. Sounding like it has been marinated in Jack Daniels and Chris Robinson in equal measure, his is a soulful roar that never tips over into just shouting. With the dream backing vocal team of Mahalia Barnes, Jade McRae, and Juanita Tippins on several songs, this is a band that must be dynamite live.

The quieter, more country-influenced moments like ‘Gold’ bring out another more reflective side to the writing. A heartstring-tugging breakup song, ‘Gold’ would be a massive hit if singles still mattered. The two-part ‘Last Light on The Highway’ which closes the album is in the southern rock tradition of leaving the epic until last. “The thunder of the road is my only friend. I’ll keep driving ‘till I’m the last light on the highway” Burrison sings. Part one features guitar straight out of a spaghetti western and drives you straight into the storm of part two. Strings, big drums, and a big guitar solo, the only word is … epic.

The plan it seems was to tour Europe and record a live album. Hopefully, this is still the plan when the current unpleasantness is passed. The only band currently working in anything like the same territory is the one led by Susan Tedeschi and Derek Trucks and they have yet to produce an album that equals this. Only the couple of slightly weaker songs stop this being a ten out of ten record. Album of the year so far.