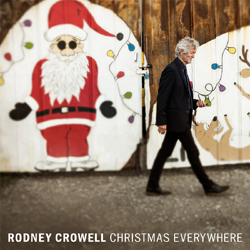 At last, a grown up Christmas album which acknowledges the conflicting demands of the season, how to weather the commercial blitzkrieg, keep the kids happy and keep oneself sane. Rodney Crowell’s Christmas album has been some years in the making with the man himself admitting that it’s not his favourite time of the year but that he’d always indulged his kids by making up “silly little Christmas songs that we’d sing around the house.” It was hearing Hayes Carll’s ‘Grateful For Christmas’, back in 2011, which “tweaked my creative curiosity. I began mulling over the idea of writing an album’s worth of original Christmas songs.” And so here we have Crowell’s contribution to the season’s excesses although it has to be said this is lean and nutritious, food for thought indeed as he peeks behind the tinsel.

The album opens with a typical syrupy choral song, the voices singing of peace on earth and such but ending with the line, “the season starts in August now, we’ll see you in the mall,” as the string backing turns sour. It’s then straight into the western swing like title song which alternates between the list of gaudy presents folk expect before falling into a reverie where Lera Lynn does a Disney turn asking Santa for a time machine to go back and stop Mark Chapman from shooting John Lennon. So far, so good. As one would expect, the album is chockfull of well crafted and expertly played songs, Crowell darting around  blues, country and rockabilly with only the jaunty ‘Christmas Makes Me Sad’ conforming to the song structure one expects from a Christmas hit (and there’s the potential here for it to grow into a seasonal perennial if it gets some airplay). But it’s the bitter family infighting on ‘Christmas In Vidor’, the broken hearted ‘Merry Christmas From An Empty Bed’ and the rollicking ‘Let’s Skip Christmas This Year’ which really find Crowell carving up his turkey with an almost sadistic sense of glee while the aching ‘Christmas In New York’ could almost be one of the protagonists of The Pogues ‘Fairy Tale Of New York‘ ruefully reminiscing on their bawdy past.

Crowell closes the album with one of those “silly little Christmas songs” he recorded with his daughters all those years ago, a perfect end to an album which captures a true sense of the holiday. There’s certainly a sense that, when the season rolls around again, this might be the first album to reach for in order to wipe out the endless seasonal earworms which assault anyone unfortunate enough to step into a shopping mall from November onwards.