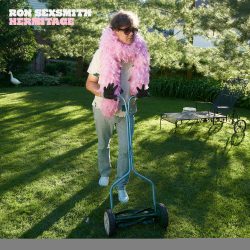 Songsmith Sexsmith arrives with his sixteenth album and it’s a notable departure from much of his earlier work. The Canadian singer/songwriter sounds positively chipper. In the wake of a move from his habitual home city of Toronto to the more rural setting of Stratford, Ontario, Sexsmith seems to have discovered a new sense of well-being and contentment. He’s never been a particularly biting or pithy songwriter but the romanticism has often been tinged with a sense of irony; on this new album, ‘Hermitage’, he seems almost relentlessly upbeat. The album gets off to an excellent start as the opening number ‘Spring of the Following Year’, is introduced not by music but by bird song, leading into a pretty, piano-driven love ballad to a new season, with some very tasteful guitar breaks and the return of the bird song at the end. All very bucolic.

This is a mellow album and really grows on you. There’s a nice, lazy, laid back vibe about the whole album that is summed up by the album’s second track, ‘Chateau Mermaid’ – “Welcome to Chateau Mermaid/ Where your day’s unhurried/ Nor shadowed by a cloud of worry/ Where the wine it flows all day”. Despite all this laid back positivity the album doesn’t lack for energy. There are nice shifts of pace about the different tracks and the album has been well laid out with the track selection leading you effortlessly through Sexsmith’s slight shifts in mood.

What we clearly have here is an album from a man who, now in his mid-fifties, is finally comfortable in his own skin and in his position in life. ‘Glow in the Dark Stars’ is a beautiful reflection on a long term relationship and the comfort it can bring, “Even through the tears and laughter/ When it all kept going down hill/ Now that’s when our love came tumbling after/ Guess it always will / Now that our eyes have seen each other/ Through the windows of our souls/ I feel we’re more like sister and brother/ Trying to make a home/ In a world of our own.”

The album has been produced by Don Kerr, a multi-instrumentalist who is also the drummer in Sexsmith’s regular band and this album was recorded in Ron’s own living room with him playing all the instruments except, perhaps not surprisingly, drums. It’s a combination of talents that has paid off in a big way. I think we all know that Ron Sexsmith is good at accompanying himself on a song, but this album lets his abilities as a musician really shine. Kerr, being a talented musician himself, has focused the production on a strong balance between the instrumentation and Sexsmith’s voice. Most of the songs are piano-led but there are creative guitar embellishments and judicious use of other instruments and Kerr’s drumming is nicely supportive throughout.

The one song that doesn’t fit quite so neatly into this new positivity is, interestingly, the lead single from the album. ‘You Don’t Wanna Hear It’ would seem to be a song about someone who doesn’t want to hear the real truth about something, doesn’t want to face the facts; I’m sure we all know people like that, especially in the current times, and they can be annoying. But even here Ron has dropped the irony of old and is more concerned about the subject’s inability to properly understand what’s going on, “While you’re not listening/ You’re missing out on something real/ But if that’s how you feel/ Don’t say I never told you so.” Sexsmith’s lyrics are always good and worth the listening – 25 years of writing and recording clearly hones the songwriting skills – and there’s always at least one song on each of his albums that captivates with his clever way with words and lyrical coupling. On ‘Hermitage’ the song that jumps out for this is the witty ‘Apparently Au Pair’ – “Apparently I fell for you/ Apparently au pair/ Where would I be if not for you?/ Apparently nowhere”.

This is a good album for our times. It’s upbeat and positive, mellow and fun and we could all do with a bit of that at the moment. Sexsmith’s voice can be a bit of an acquired taste but you really can’t fault his songwriting. He might need to tone down the positivity for the next album, you can have a bit too much of a good thing, though by then perhaps rural life won’t seem quite so bright and shiny but, for now, this is the musical tonic that many could do with. A little light in the darkness.

Wit and positivity from a fine songwriter