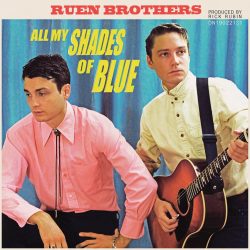 Ruen Brothers aka Henry and Rupert Stansall are Scunthorpe’s very own success story. Having been catapulted from boozy ‘Sunny Scunny’ dives to Rick Rubin’s Malibu Shangri La studios they could be forgiven for being a little bewildered at the fanfare surrounding their Roy Orbison and Everly Brothers -inspired take on rock n roll. Instead, their starched shirts remain as crisp as ever and there’s still not a hair out of place while debut album ‘All My Shades Of Blue’ continues to take the US by storm.

A stellar line-up includes Chad Smith (Red Hot Chilli Peppers) on drums, Dave Keuning (The Killers) and the former Faces/Small Faces keys man Ian Mclagan and along with producer Rubin the brothers have certainly attracted attention following the release of their single ‘Aces’ back in 2013. The album opens with a setting of the scene as the wild dogs around the famous California studios are caught on tape in ‘Coyotes Of Malibu’ before ‘Walk Like A Man’ indicates a strutting upbeat twenty-first-century introduction to the Stansalls’ approach.

The title track is a chance for Henry to show his vocal range and power and really is evocative of fifties midwest diners and the milkshake and jukebox culture. This atmosphere is enhanced with the next track ‘Make The World Go Away’, a real tear-jerker from the Roy Orbison school of crooner ballads. ‘Finer Things’ steps things up, crunching riffs keeping things simple under a brass section and it becomes obvious that here is a song about ambition, goals and the “finer things” being more than could be offered by the Scunthorpe music industry, all things considered.

The aforementioned ‘Aces’ heralds a shift to a more contemporary feel which is maintained throughout the latter stages of the album and the impressions are of a tight, professional, visually appealing act who transfer well to the stage with their big sound and confident manner. Album closer ‘Caller’ sums things up for the brothers as they blend Arctic Monkeys-style lyrical irony and power chords with Beach Boys harmonies.

‘All My Shades Of Blue’ conjures all the slickness of an episode of The X- Factor without the clipped wings and manufactured restraints placed on the artists. The Ruen brothers create and perform their music with a refreshing freedom for the modern era without losing sight of important ingredients such as image. A bargain that both the bigwigs and the band can be happy with and a fine debut album to boot.