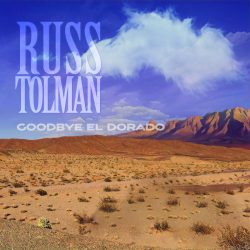 ‘Goodbye El Dorado’ is the eighth solo release from True West frontman and founder Russ Tolman. Written in the midst of a sabbatical in Osaka, Japan, it is a love letter to his US homeland and is sonically rooted in American country standards. The primary issue here, however, is that Tolman does not even threaten to tread new ground. The record is a drab affair of simplistic melodies and lyrical content which has been covered a million times before. ‘405’ is an ode to an overlong bus journey that nobody needed to hear, with Randy Newman-esque observations (“you’re really gonna piss me off, I’m stuck and I can’t get off”), and ‘North Hollywood Dream’ is soaked in more clichés than the title suggests (“you’ll have plenty of time for dreaming, so dream for dreaming’s sake”).

Tolman clearly likes to sing about places, and the majority of the tracks on the record are titled or are about specific cities or states. Unfortunately, for the local tourist boards he manages to make them sound thoroughly unappealing (intentional or otherwise). ‘Yuba City’ is one of the many examples, in which he sings “I’m going down to Yuba City, if I’m going down at all” as an absolutely shambolic keyboard solo plays us out.

The one redeeming moment is on ‘Do You Like The Way’ which twists and turns through ‘Sultans Of Swing’-inspired verses sprinkled this time with joyful keys. Tolman avoids traditional song structure and familiar themes and it results in the most listenable track on the record.

Overall though, ‘Goodbye El Dorado’ is a dull, unambitious effort, and clocking in at almost an hour, long overstays its welcome. If Tolman’s stay in Japan has resulted in a record that’s so clearly rooted in American themes, it questions the porousness of Japanese culture, or Tolman’s seeming reluctance to embrace it.