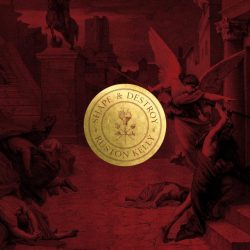 With his 2018 debut album ‘Dying Star’, Ruston Kelly announced himself as a serious talent. AUK’s Jim Finnie described that release as “A really solid debut album by an artist destined for greater things”. The record was largely built around Kelly’s own personal struggles with drug addiction, alcoholism, and his mental health. His new album ‘Shape & Destroy’ can be viewed as much as a companion piece, as it is follow-up. The themes are similar but where ‘Dying Star’ documented Kelly’s problems, on ‘Shape & Destroy’ he navigates his way through them. It is a journey which has been transformative, although Kelly acknowledges that, although he is now on the right path, there have been some trips along the way and that he has not yet completed the journey.

Once again jointly self-produced with Jarrad K, musically ‘Shape and Destroy’ doesn’t stray too far from the gentle roots-rock template of its predecessor. The arrangements and production are sympathetic and give air to Kelly’s well-crafted songs. There are a number of themes that emerge as the songs unfold. Firstly, there is an optimistic thread, encapsulated in ‘Alive’ – “Looking at the flowers coming up from the ground, through all the rubble of everything that I tore down” and ‘Under the Sun’ – “there are still brighter days to come”. However, Kelly also sounds a note of caution in ‘Changes’ – “Thought I was finally in the clear. All it takes is once to make your demons reappear”.

The final theme celebrates the part played by his wife, Kacey Musgraves, in his own recovery and restoration, “and it’s all because of you my dear”. On ‘In the Blue’ Kelly sings “I’ve got a woman, her hands are gold, carries the sun to me when I’m cold and afraid”. In July, Ruston Kelly and Kacey Musgraves announced that they are to divorce. Given the affection and gratitude with which Kelly refers to Musgraves on the album, one can only hope that the effect of their separation is not too detrimental to his seemingly precarious psychological state.

“Shape & Destroy” will further strengthen Kelly’s growing reputation as a songwriter and an artist. Once again, his songs lay himself bare, but the quality of the writing steers him well clear of the kind of awkward mawkishness, that such personal testaments are prone to produce. Moreover, with his second full-length album Ruston Kelly has enhanced his credentials to be considered as a major voice in americana music.