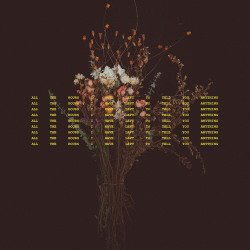 A Canadian of Swedish heritage, Sarah MacDougall is often summed up as capturing  a sense of the icy wastes of both countries in her music. She’s certainly been garlanded for her work, nominated for several awards in both countries and is one of those artists who have seen their songs included in popular television series, in this case, The Vampire Diaries. ‘All The Hours I Have Left To Tell You Anything’ is her fourth album but unfortunately, it continues in the tradition of its predecessor, ‘Grand Canyon‘, which saw MacDougall’s songs almost swamped by overblown arrangements in comparison to its excellent forerunner, ‘The Greatest One Alive’.

Here MacDougall’s elfin voice is surrounded on many of the songs by tumultuous percussion, synthesised strings and grand choruses, sounding at times as if Stevie Nicks had fallen in with a new age band creating music for cosmic elevators. That’s perhaps a bit savage but have a listen to ‘Animal’ and see if we’re anywhere close with that description. It’s apparent from the opening song ‘Empire’ that this in no way anywhere near folk music as the breathless verses rush towards the anthemic chorus. It’s a pity really as a couple of the songs do allow MacDougall to catch her breath and sing a simple song. ‘Baby I Know’ is just MacDougall and a guitar and all the better for that as she delivers a lovely bed sit like love song. it’s a pity that the rest of the songs are drowned by the bells and whistles approach as MacDougall remains an interesting writer but the overall feel of an eighties production removes the album far from what one would consider Americana or roots music.”

A fine singer/songwriter somewhat lost amidst the fussy production