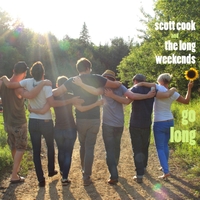 A bit overly complicated, you just want Cook to make a record, and forget the Frisbee spin off game sleeves etc.  Musically it is very appealing, lyrically hilarious; “Judging from the angle of the sun its beer o’clock is good that said, as is a “cluster folk”. Recorded in a weekend, recorded live off the floor, it sounds like chums having a good time.

It’s a sort of good time Jack Johnson slacker surfer country, witty and sharp it does border on novelty at times – I see the concept, and it’s amusing poking fun at the thing you’re actually doing.  It’s very definitely Canadian, left field, honky tonk clattery barroom country, and its heart is in the right place, and we’ve all been at a campfire where we’ve heard Oasis sung, so I can see Cook’s point when he sings about communal singing.

He does a great line the argument for staying single in the fourth and fifth tracks, but it’s not a serious record, and does not purport to be, it’s fun and enlivening, like They Might Be Giants or Bare Naked Ladies.  There is a lot of small ‘p’ politics and serious topics, yet somehow it is tricky to take it that way, regardless of the big themes, god, poverty etc.  But importantly it has the best use of the word “trapezoid” in rock n’ roll. A curiosity.