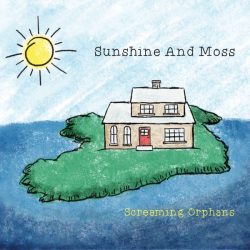 This Irish girl-band; Angela (bass, violin, vocals), Gráinne (guitar, vocals), Joan (Drums, vocals)  and Marie-Thérèse Diver (keys, accordion vocals), were formerly known as the Diver Sisters during the years they performed extensively with their mother, American born Kathleen Fitzgerald. The Screaming Orphans, as renamed in the mid-’90s after reaching their teenage years and deciding to go it alone, tour extensively throughout Europe and America where they are best known for their original brand of melodic and timeless pop songs. However, having been born and bred Celtic singers and musicians, the sisters easily step back into their traditional style and sound with a natural sentiment and effortlessly give their modern take on this collection of classic works.
‘Sunshine and Moss’ is a delightful selection of songs and instrumentals, dating back over centuries. ‘Johnny Has Gone For a Soldier’, for a start is a rousing Irish folk song lamenting war. This flawless performance advances from being delicately tragic to defiantly strident, showcasing the fabulous range of emotion and musicality from the sisters.

‘Eileen Oge’, on the other hand, is pacy with more of a rockier sound. Also, know as ‘The Shamrock Barndance’, this song, written by comic songwriter Percy French (1854-1920) will surely whip up a jig live whilst instrumental reel ‘Peggy on the Settle’ will certainly keep that pace going without time for a breather. ‘My Grandfather’s Clock’, a circa 1876 standard of both British brass & colliery bands and Bluegrass is however gently poetic telling the well-worn story in contemporary fashion.

‘Factory Girl’ changes the tempo anew with a sensational A Capella version of this traditional song, which has also been covered by the likes of The Chieftans, Eric Burdon and Sinead O’Connor. The voices of The Screaming Orphans melding utterly flawlessly yet again. Furthermore, the two instrumentals on the album; ‘John the Shepherd’ and ‘Peggy on The Settle’ further illustrate the girls’ euphony and performing prowess. The sisters all master their varied instruments and vocals with such passion, precision and excellence. No wonder, collectively, they go down a storm wherever they play live.

Looking back over their career to date, it seems there has been a notable lack of shows on our British mainland. That said, they are indeed significant contenders for our folk festivals to capitalise on, hopefully in the not too distant future.

The sisters revisit their roots with stunning results