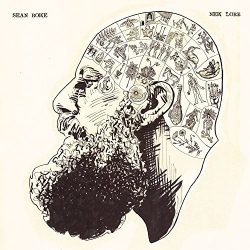 I really try to be fair when writing these reviews. I try not to get too caught up in my own taste, try to be a little bit objective at least, measure the records against what we collectively agree is our scoring system. I try to find the positives; it gives me no pleasure to disagree fervently with some of my fellow writers. I really fight hard not to give in to urges to grandly dismiss a record in a hail of sarcasm and self-serving vitriol wrapped up as criticism (for this see my work from 2005). Then I get records like this to review that I dislike on first listen and every time I listen (again and again – I like to discern and understand the roots of my dislike) I really fail to see the good or understand the attraction of a record like this.

Rowe has a deep and resonant voice and a really good thing about this record is the production it makes the most of a minimal palate of sounds, it doesn’t try too hard. My problem is the trite lyrics and the songs themselves – Newton’s Cradle (which we’ve featured as Video of the Day) finds Rowe equidistant between Matthew E White and Barry White, a soul/Americana hybrid with lovely fluttering Philadelphia strings. The song though is pure stodge. And that’s how I find the whole thing; I Can’t Make A Living From Holding You is noble in its sentiment but it is too sentimental, and for cloying you need look no further than The Very First Snow which again sounds great, and the sentiment is fine, we’ve all been paralysed by grief and loss, but setting it at Christmas time doesn’t add emotional depth, it just feels like a manipulation.

Gas Station Rose is almost there, a simple guitar buttressed by piano for the chorus lays down the spine of a good song and he doesn’t go too far, it’s kept simple. Inevitably though a battalion of strings arrive, to underscore the point. The Salmon shows off his falsetto, which is strangely affecting and the repeating loops of vocals work well but there’s always the tendency to lay everything on too thick, so once again the strings arrive. This is me trying to restrain myself, finding the positives. I prefer his earlier incarnation as a Johnny Cash like troubadour and it’s not often that I’d make a statement like that.