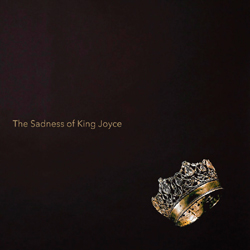 The Sadness of King Joyce is the debut solo album from Shane Joyce, front man for Ireland’s Midnight Union Band, a freewheeling bunch of folk rockers who recently whipped up a storm at the Ramblin’ Roots weekend. It’s a sight removed from the band’s usual fare with Joyce offering here nine songs which sound as if they were drawn from a well of desperation. He cites the Beat writers along with Dylan and Cohen as his mentors and the Cohen influence is evident on several of the songs here but elsewhere he summons up the sometimes sordid world of Jacques Brel while Gavin Friday and Tom Waits hover around also.

Following the Cohen lead one could call this a bedsit album but instead of a cosy and somewhat romantic patchouli scented refuge, the room conjured up here is dark and dank, the bedclothes stained and the occupant lies on the bed with bloodshot eyes trying to avoid the night terrors which torment him. The album is chock full of nightmare images – castration,  graves too full to accept more dead, spider women who suck you dry – while the music is sparse, acoustic guitar and piano mainly with string arrangements which amplify the sense of loneliness in their  morose romanticism.  Joyce meanwhile sings almost deadpan, resigned to his fate.

The album opens with the title song which almost defines the disc as weeping strings, spare piano and scrubbed guitar conjure up an existential crisis of a mood as Joyce voices his innermost thoughts setting up a dialogue between his reality and his idealised alter ego, King Joyce, but in the end he reminds us, “this is just a useless song.” Intriguingly the song recalls Australia’s Triffids in its sweep.  The album’s populated by  romantic losers, some poetic as on ‘The Hollow,’ others scabrous as on the coruscating sketch which is ‘Bad Woman.’ ‘The Spider’ surely deserves its own chapter in a book on Freudian dreams but here we’ll merely comment on its delicious arrangement which is dangerously enticing with its waltz time refrain a sincere nod to L. Cohen. The beauty of the album is in the fine balancing act Joyce performs between the nihilism of the words and the delicate filigrees of the song arrangements with ‘This Fire’ perhaps the “prettiest” number here, the finger picking guitar lines plucked again from Cohen while ‘Winter’ recalls the Canadian’s infamous ‘Chelsea Hotel No. 2.’ There’s a slight stumble on ‘Piano Song’ which seems intended to be a ballad in the style of Tom Waits which comes across more in a Billy Joel vein but it’s more than made up for on the closing ‘To Lady, Too Late’ with its baroque strings and dreamlike invocation of, “a new wind blowing, there’s a velvet sky, there’s something slowing between you and I.” Here hope springs eternal, even for a bedsit neurotic who sees dawn as, “the morning sun come screaming through that gloom.” The song dances to the end of love as such with its closing piano motif reflecting that which opened the album, closing the cycle.

Joyce wears his influences plainly on his sleeve and anyone who digs Cohen’s bleaker works such as ‘Songs of Love & Hate’ will surely love this but on its own level the album is an impressive piece of work. The words are as important as the music, a reflection of Joyce’s belief that Cohen was the foremost poet-songwriter of our times.

Songs from the bottom of a soulful well