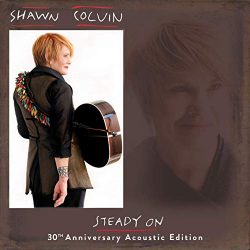 When Colvin’s debut album ‘Steady On‘ was released in 1989 Americana was barely a thing. 30 years on she has revisited the songs in an acoustic setting. Colvin has been playing many of these songs acoustically in concert for some time, and they also appear on the ‘Live 88′ album, so in some ways this is nothing new.

The original album has a typically 80s production, all compressed drums, echo and chorused guitars, and has not aged well, so the update to a more timeless setting for the songs makes sense. They are good songs too, and releasing them from their production has highlighted just how good. The opening title track has a feel of Rickie Lee Jones about it. Other songs, notably the minor key ‘Stranded’ end up in Joni Mitchell territory. The songs that benefit most from the new treatment are ‘Cry Like An Angel‘ which sounds like a completely different song, and ‘Another Long One‘. ‘The Story‘ is a good example of where the words had been lost in the mix before and reveal themselves now as masterful. That spotlight on Colvin’s words on this new album highlights just how good a songwriter she is. With this album, other acoustic reworkings and two albums of cover versions to her name some reviewers have criticised Colvin for having no new songs to offer.

On her website Colvin describes this recording as a deliberate reclaiming of her legacy. She says “All in all, this is the incarnation that feels most genuine. This represents who I am as an artist and all I ever wanted to be” In the end Jazz and folk artists often record multiple versions of their tunes, why shouldn’t Colvin?