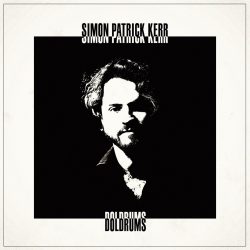 Simon Patrick Kerr is releasing his first solo album, ‘Doldrums’, and it’s a change in direction from the driving rock pop of his regular band The Wans. As frontman for the trio, Nashville based Kerr writes catchy, upbeat, rock songs but there is more to his music than an infectious hook. Of the change in direction Kerr says, “I never want to get to the point of being comfortable as a songwriter. So I wanted this album to be as vulnerable as possible.” The music has softened and deepened; influenced by personal life issues and the wider political landscape. This is growth and positive change on a record. Things are getting serious and it’s a pleasure to hear.

Relocating to Nashville from Ireland in 1997, with his successful musician father, has exposed Kerr to an interesting blend of musical influences leading to this acoustic, folk-tinged set of songs. For a debut solo record this is a well-rounded and worthwhile effort. In a sense less fun then The Wans but sometimes it’s good to dial things down a bit.

‘Songbird’ is a standout track. Dealing with the loss of a family friend to cancer it evokes the emotional power of Ryan Adams, who is clearly a strong influence. The song is sad and uplifting at the same time.

‘God was a Gambler’ takes aim at religion with a subtle ferocity. Lovely singing and playing with social comment on the disappointment of commodified religion. Kerr has something to say that’s worth hearing.

The playing is mainly acoustic in nature. This is a relaxed set of slow, thoughtful songs with a clear modern Americana thread. Excellent finger picked guitar emerges as the songs progress and the musicianship is of a high standard throughout. ‘Running on Fumes’ ups the tempo somewhat to good effect hinting at the potential for a blend of the acoustic and more rock based approach Kerr has shown himself capable of. This is a strong debut and statement of intent.

A thoughtful and acoustic debut album with personal and political depth