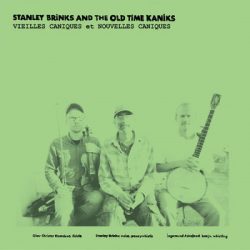 I don’t know how many records Stanley Bring aka Andre Herman Dune has been involved in or how many gigs he’s played, hundreds for the former and thousands for the latter. He’s completely at ease as a performer and these songs, like much of his catalogue (at least that much known to me), ooze a kind of infectious convivial bonhomie that immediately put you at ease, constantly referencing social situations, friends getting together and drinking and the love songs are everyday tales told from the perspective of a courtly lover, a man full of respect for his audience, his peers and the objects of his desire.

These two sets are no different – he wakes up with a hangover on the opener Ten in the Morning. The backing of fiddle and banjo for the Norwegian folkers The Old Time Kanicks is simplicity itself, sitting behind his vocals during the verses, puffing up for the choruses and occasionally stepping out in the instrumental breaks. There’s no way you could describe this music as anti-folk – Brinks is typical of the generation that kicked against entrenched unchanging folk music but now music of this ilk has been reabsorbed with its mix of traditional instrumental elements, can-dodo attitude and lyrics that deal with the personal as well as the political. Brinks isn’t averse to a yodel or to throw in some whistling, anything to get the most out of these guerrilla recording sessions – two records recorded in two consecutive days, there’s little to tell them apart.

The songs pass quickly and never depart too far from the persona that Brinks has built in the last couple of decades: the cosmopolitan troubadour, moving across borders easily. I’m sure he can find a party in any major city and quite a number of minor ones too. The violin isn’t much more than a mellifluous scratching and the banjo is often just a perfunctory strum. When time is invested as on the romantic Your Brown Eyes the fiddle accompanies Brink’s voice and carries his desires waltzing into the air. This Place is Great makes more of the melody and Brinks carries the tune with more care; the banjo is like velvety dulcimer banging away on your heartstrings. The songs sits in a lovely run of songs and it’s followed by Please Don’t Take My Love Away with cracked melancholy, harmonies and an hysterical fiddle, then You Broke My Heart with a nagging melody, the fiddle plucked strangely reminding of the Cure.

It seems that the melancholy is still with Brinks and he’s trying to work through it as If You Don’t Love Me, Julie and Jools seem to prove. There’s nothing wrong with that: break-ups are the motivator for many great songs. The closing When Will I See You Again asks a universal question and that’s what Brinks is good at; personalising existential angst, he’s refreshingly honest and not above embarrassing himself. It’s almost impossible to keep us with his discography and if you’ve dabbled and desisted, this is a good time to get back on board.