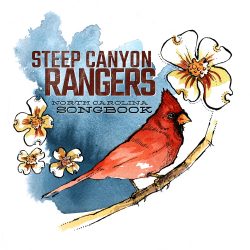 Live albums can often feel a pointless affair: a selection of songs you already know usually played to a lesser standard than the studio version, a crowd you weren’t part of, cheering in the background, and no way to witness the performance visually. With major label acts, the live album is often put out there as a money grab, or as a way for the artist to tick another one off the number of required albums in a recording contract. So it is a relief to see that the Steep Canyon Rangers have offered us something different in ‘North Carolina Songbook’.

Recorded at roots music festival MerleFest earlier in 2019, the band paid tribute to their home state of North Carolina by performing a set of covers from fellow North Carolina acts such as Ben E. King, James Taylor, and Thelonious Monk, all done in their signature style.

King’s ‘Stand By Me’ opens the set, and its pleasantly familiar sound sets the tone for what’s to come. The songs covered are all in the band’s wheelhouse, fitting nicely into their bluegrass sound, and consequently they wisely don’t try to mess with the formula too much. The song that most finds them stepping outside their comfort zone is the Monk jazz classic ‘Blue Monk’, which sees them pay great tribute to the original, while injecting a rip roaring side of bluegrass for good measure.

While not dissimilar in structure to the original, their version of ‘I’ve Endured’ by Ola Belle Reed is livelier, giving an interesting spin to the lyrics of hardship – the buoyancy of the beat making the words seem less about how terrible things are presently and perhaps more about how bad they had been when reflecting back from better times. Taylor’s ‘Sweet Baby James’ is the most stripped down track, with some lovely vocal harmonies on the chorus that really add depth.

‘Drunkard’s Hiccups’ (originally by Tommy Jerrell) is a fairly straightforward cover, but it becomes a standout track by virtue of a quality vocal performance from lead singer Woody Platt, his voice adding some real sass and vigour to the proceedings. Elizabeth Cotten’s ‘Shake Sugree’ has a more world worn sound in the hands of the Steep Canyon Rangers, unsurprisingly since the original featured her 12-year-old granddaughter on vocals singing with an unrepeatable pureness.

‘Your Lone Journey’, which was originally co-written and performed by husband and wife duo Doc and Rosa Lee Watson, closes the album. “Some might think it’s a spiritual song, some might think it’s a love song: it’s just a perfectly written song by a wonderful North Carolina couple,” Platt says in his introduction; and perfect it is not only in its original incarnation, but in the hands of the Rangers too. There are lush harmonies, and it’s impossible not to reflect on the now deeper resonance of the lyrics when you know the couple behind them passed away within a couple of months of each other in 2012 after 66 years of marriage.

Although not a whole lot was done to reinvent the songs covered on this live record, it’s still a pleasure to hear them dusted off and presented anew; maybe even making some new fans of the original artists behind them along the way.

A well performed set that shines a light on some classics