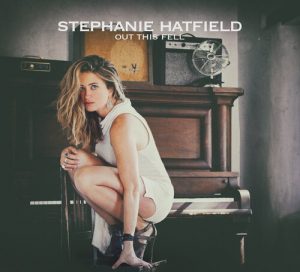 Stephanie Hatfield is probably a new name to most in the UK. The  cover of her album ‘Out This Fell’ features Stephanie herself very prominently and there is no real hint in the cover as to the genre of the music contained within. Stephanie’s publicity material describes her as “effortlessly navigating multiple genres” and rock, pop, country and folk can all be heard on this album. It’s clear that this music is aimed at a wide potential audience and is not restricted to any single specific genre.

‘Out This Fell’ is Stephanie’s fourth album and it is self-funded and produced by her husband, Bill Palmer, in their hometown of Santa Fe where she has a sizeable local following and he has a local studio. Hailing originally from Detroit with a Kentucky hillbilly heritage, Stephanie has seen and experienced a lot in her life and uses her experiences and emotions to fuel her songwriting. The music itself is professionally played and produced with a definite pop sheen enhanced by the mastering by Frank Arkwright from Abbey Road Studios, all designed to support Stephanie’s vocals. If readers want a hook into the music, then it is that it has echoes of Brandi Carlile and Calexico with the pop aspect going back to  Carly Simon in the ’70s.

All ten tracks are self-composed and ‘Away Gently’ kicks the album off with jangling guitars, cymbal crashes, an insistent beat with aching vocals bemoaning lost love. The next track, ‘Day or Decades’, has lyrics dealing with mental breakdown and features a more rock orientated guitar and vocal sound. We then move to post-war Italy for the lead single ‘Gone Gone Gone’ which is based on the Neapolitan novels of Elena Ferrante and features Stephanie’s soaring vocals. Howling coyotes feature on the next track ‘In The Woods’. The South West makes its presence felt on ‘Not Her’ with what sounds like fiddle and Mexican trumpet in the mix. Stephanie flexes her power ballad muscles on ‘Never Go Away’ which deals with emotional pain. We are back in the South West with Spanish guitar to the fore on ‘Lucy’ which explores the emotions linked to longing for another.

In her younger days Stephanie underwent operatic training and this is put to useful effect on ‘River Still Runs’. Stephanie ponders the challenges of those living in her hometown, Detroit, in ‘Michigan’ with slide and acoustic guitars the main guitar colour. The album closes quietly with ‘Sweetness Does’ which reflects on a love that continues after death.

As an independent release with no record company backing, social media, digital platforms and streaming services will play a fundamental part in getting ‘Out This Fell’ to its intended audience. While the music is easy on the ear, well played and produced with good vocals, it isn’t groundbreaking. The lead single ‘Gone Gone Gone’ is a good example of Stephanie’s style and the overall album so if you like this track you may want to explore her music further.