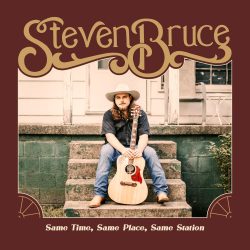 Fredericksburg, VA country rocker Steven Bruce’s debut album mixes cosmic country with a Waylon swagger and Petty riffs, all in a voice pitched between John Prine and Lukas Nelson. Bruce draws most of his writing from his own experiences which, over the past few years, have been mostly bad. Now in his late 20’s Bruce looks back on playing bars, getting married and divorced then losing his beloved grandparents who had encouraged his musical talents from an early age. But he doesn’t wallow in self-pity, he accepts his lot and gets on with it.

First up is divorce, ‘Cryin’ Eyes’. The Telecaster strut leading into, “I still see the stains of sadness from the teardrops she once cried”, with a pedal steel to match shouts outlaw country. The harmonies featuring Mackenzie Roark and Karen Jonas deepen Bruce’s sadness.

In tribute to his late grandparents Bruce intensifies the heartbreak. As a kid he’d play them Merle Haggard on his guitar, looking after them in later life. Led again by that dominant Telecaster line through the layers of pedal steel, slide and keys, ‘Keeping Time’ adds a strength to match Bruce’s departed relationship with his grandparents. Dedicated to his grandparents, ‘Same Time, Same Place, Same Station’ is what they’d say each time he left their house.

Bruce isn’t totally consumed by life’s blows. ‘Weekend Song’ kicks the roadhouse door down with a rocking frenzy of hedonism. Redolent of his heroes ‘Detours’ has a Heartbreakers flow far from the country of his melancholia.

Somewhere in between comes the cosmic country-rock of ‘Rhinestoned’. Unsurprisingly, Gram Parsons is another big influence. Steven Bruce does country and rock very well but in a 1970s style country-rock he excels.