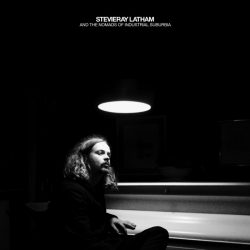 According to the bumpf for ‘The Nomads of Industrial Suburbia’, Devonian  StevieRay Latham’s second EP in a year “merges his passions for fine art and songwriting.” And the end result is certainly something more of a collage of finely turned-out indy-folk rock musical ‘paintings’ than straight-up songs. It’s not just the minute-long intro and minute-long epilogue on the opening song, not to mention the 40-second burst of ethereal, New Age-style electronica that ends the EP that gives the album its artwork-y feel. To judge by the repetitive lyrics Latham often favours, rather than vehicles for developing narratives as normal folk tends to do – storytelling, if you like – instead, he’s trying to entwine the words deep into some highly atmospheric, and diverse, musical styles. It could be just an impression but the words’ actual meaning, rather than being the main point of each song, feel almost secondary.

That’s when there are any words at all. The first of the four-and-a-bit tracks,  a delicate, simply looping melody played on some kind of chimes and harp – called ‘La Fôret’ but sounding somewhat like the ominous theme tune for a spaghetti Western – is an instrumental barely a minute long, that acts as an introduction to the album’s main song, ‘Everything Changes’. That is hardly an earthshattering observation,  maybe, but that’s not the point: instead, the idea that ‘Everything Changes’ acts more like a central column for a series of varying musical landscapes – in this case building up from a quietly played chorus to a noisy maelstrom of electric guitars, before fading back to a lengthy, minimalist finale, complete with some rural birdsong sounds.

Albeit much more condensed, the same creative strategy seems to be present in all three remaining songs and it’s maybe at its most effective with the most upbeat, least delicate-sounding song: ‘Thief’ where a catchy, Oriental or Middle Eastern-sounding melody grumbles and growls first around a single guitar before some thudding glam rock chords and vintage 1970s drumming kick in. A close second in terms of surprise is another punchier number: ‘I Don’t Mind’, which thunders and tumbles over itself in the best 1990s indy power-pop-meets-grunge tradition.

It’s all a bit odd, maybe, and creating what is effectively a mini ‘concept album’ will probably be challenged as pretentious or over-serious in some quarters. (What’s more, anybody who describes themselves as an ‘indy-folk troubadour’, as Latham does, is maybe asking for a certain amount of mickey-taking.) But even when things slow down and get stripped down on the melancholy ‘Madeline’, there’s enough momentum and sheer richness of sound to ensure ‘Madeline’ adds another layer of interest what is a very intriguing – and enjoyable – EP from start to finish.  So overall,  but particularly if you like your ‘art for art’s sake’, ‘Nomads of Industrial Suburbia’ won’t disappoint at all.