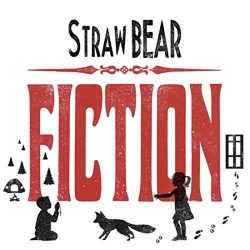 Straw Bear named their band after a “bizarre” festival in the home counties during which a single participant is dressed as yep, a straw bear, in celebration of the start of the agricultural year. This says more about frontman and founding member Ian Ray’s sense of the offbeat than it does about any association with crop rotation schemes among their members. This is mirrored in the quirky lyrics and weaving melodies of ‘Fiction’ – the third album and by far the most psychedelic release by this unorthodox, intriguing fellowship.

Like its predecessor,  ‘Black Bank,’ ‘Fiction’ harks back. Where it harks back to is open to interpretation but progress is definite despite the historical feel. Cerys Matthews, Bob Harris et al were huge aficionados of the last offering, but knowing them both, they’ll appreciate the efforts that Straw Bear have made to grow as a band. They’ve not stuck to a winning formula but branched out in a new and exciting direction. Many bands start out with the acoustic ‘bedroom’ feel until they grow more confident in their own skin, and that’s how Straw Bear have matured.  ‘Fiction’ is their best album yet, although there are better still to come.

Having listened a few times to this record and absorbed their influences e.g. Shins and Fleet Foxes,  it’s surprising that the list didn’t include The Byrds and The Coral among them. But opinions are subjective… The brief title track gives a window into what’s to come – punchy melody and dare I say a bit of that bright Hank Marvin style. There’s little doubt that ‘All You Need Is An Electric Guitar’ brings George Harrison to mind and it’s odd but ‘The Healing Of Augusta De La Ru’ has overtures of Donovan. Which just shows how much there is here to draw on. ‘Shut The Door’ stands out as – and let’s hope it will be –  the next single with its simple yet formidable lyric: “We should go for a drink/At a lonely place, I’m a lonely face/Tell me when’s good for you so I don’t have to/We should catch up soon.” It might not sound very American. But it’s English americana, spilling over with irony.

Talking of americana, ‘Venetian gothic’ is as close as this comes to the midwest sound. Pilgrims holler over a backdrop of imaginary mountainous  Utah echoes. Intentional or not, Straw Bear hit the red dirt when they want to. ‘Your Middle Name’ finishes the album in a folky chilled out way. Just like, well, a Paddington Straw Bear.

Here is a classic example of a band that takes a few listens to appreciate. As our readers know, that often makes them all the more worth listening to. Bob Harris seldom gets it wrong and these home counties festival goers show that ‘Fiction’ can be the real thing.