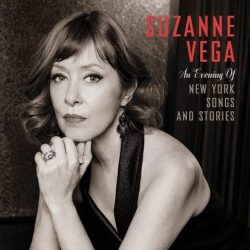 Close your eyes as you listen to the opening of, ‘An Evening of New York Songs and Stories’ and you might be able to imagine yourself amongst the audience surrounded by the old world charm of New York City’s Cafe Carlyle where this album was recorded in 2019. As a member of the audience, you may, like Vega herself, be a native New Yorker, or perhaps you are from out of town; either way, you will probably be expecting a journey through some of the familiar and less familiar parts of Vega’s oeuvre. When you finally leave after the closing track, your expectations will have been met and you might feel closer to the essence of these songs penned by one of New York’s finest songsmiths.

During the course of the evening, Vega pays tribute to her friend, the late Lou Reed by giving us a glorious, swirling interpretation of ‘Walk on the Wild Side’. She manages to generate a vocal tone that closely allies with that of Reed’s giving an almost familial resemblance. The guitar solo is an object lesson in understatement. Indeed, this album as a whole, given its theme could be said to be a sister album to Reed’s classic 1989 release, ‘New York’ now released as a deluxe set by Rhino. Both works share dark visions with songs structured as sketches and scenes; there is an element of theatre involved, with Vega herself commenting about her songwriting, “I have a problem with specifically confessional songwriting. I think you have to craft it in some way. I don’t think you can come on stage and blurt out your innermost feelings”.

The older songs seem to have matured with age, being less frenetic, more considered; deeper. ‘Marlene on the Wall‘ & ‘Luka’ typify this maturity; they sing of loneliness and the dreadful topic of child abuse respectively as we first heard them but they are now delivered with the benefit of increased layers of experience. ‘New York is a Woman’ with its wonderful line, “She’s happy that you’re here but when you disappear, she won’t know you’re gone to say goodbye” shows beauty from a city that can be joyful, romantic and ugly in turns. In contrast with the reflective mood of ‘New York is a Woman’, there is a more jaunty, jazzy bounce to, ‘NY is my Destination’ which is taken from Vega’s one-woman play about the Southern gothic novelist Carson McCullers. There is much to enjoy in, ‘Cracking’ with its dreamlike, impressionistic glimpses of what might lie beyond our material experience of the world. ‘Gypsy KK’ was written by an 18-year-old Vega about the end of a romance and her return to NYC. It has stood the test of time and remains a beautiful song.

As you walk back to your apartment or hotel from the Cafe Carlye, you might stop into Tom’s restaurant on 112th St & Broadway, the area where Vega grew up and the establishment that inspired ‘Tom’s Diner’. As you sip your coffee you might reflect on your experience of Suzanne Vega playing her songs live for you and hope that the atmosphere of the evening could be captured for you to listen to again. You won’t be disappointed – it has been with the release of ‘An Evening of New York Songs and Stories’.

The essence of a city captured by Vega's unique vision