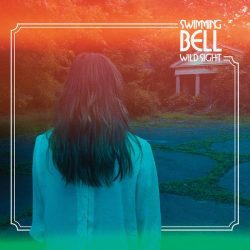 Swimming Bell is the solo project of Brooklyn based Katie Schottland, ‘Wild Sight’ the debut album following her ‘The Golden Heart’ EP in 2017. That this gentle music carries nothing of the metropolis is perhaps explained by much of its creation being in the UK with collaborator and producer Oli Deacon (Lowpines), including a spell in Leeds last winter. When Schottland was incapacitated by a broken foot in 2015, she picked up an acoustic and started to play by learning Neil Young’s ‘Harvest Moon’, and some of these tracks are so spaciously produced that you can almost hear that brush on the village dance floor, a gust of wind in ‘Quietly Calling’ for instance.

Many of her publicity shots include trees, and whilst that suggests dappled as an obvious descriptor, it fits. Whilst there are some more propulsive tracks included, it is the gentler material that impresses. Schottland’s beautiful keening voice is often multi-tracked and overdubbed to provide an almost ethereal choir-like effect, especially in ‘1988’, a song of and about memory, Schottland saying “1988 was the year that I learned to ride a bike. It’s also the year that I fell off my bike and had a terrible concussion and couldn’t remember who I was.” Deacon uses much pedal steel throughout the album, very subtly at times, providing lush, clever atmospheres, allowing a dream feel of remarkable intimacy.